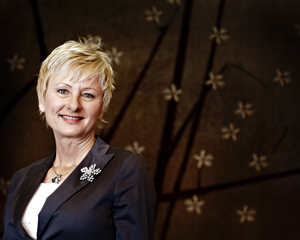 Cathy Anderson’s credentials for the predominantly male profession of engineering began taking shape years ago with her father at the breakfast table in their Milford home. Jim Gustafson, an engineer for more than 25 years at General Motors Corp., where he supervised a lab at the Milford Proving Ground, mesmerized his young daughter with stories of his work as an innovator in the development of airbags and crash-test dummies.

While her father worked at making motor vehicles safer, Anderson, through her environmental engineering and construction company, Milford-based Platinum Engineering, believes the business of developing renewable energy could do for southeast Michigan what GM did for the auto industry. “Detroit, in particular, has all the brains, the technology, and large manufacturing facilities already in place,” she says. “In the past, environmental concerns were the drivers of change. Now the urgency of an economy in recession is making it a very good financial investment to pursue green concepts.”

In addition, CCES has submitted a proposal to Tech Town that would create an integrated renewable-energy system in one of the structures there. That project would serve as an innovation incubator, where businesses and students could observe green concepts in practice. For example, the structure would include removable panels so that students could actually see utility lines or insulation techniques.

Last year, Anderson was involved in a notable Midwest green concept project. Months before the RCA Dome in Indianapolis was demolished, Anderson and other experts went through the structure and identified materials such as carpeting, tile, drywall, and electrical and plumbing fixtures that could be saved, recycled, and sold. “We found 94 percent of it was reusable,” she says.