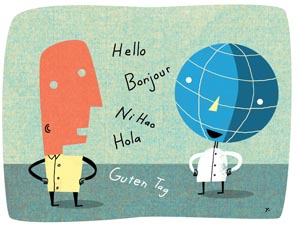 Jason and Michael Teshuba are used to navigating different business models. In 2002, the siblings designed and built websites for a variety of clients. Two years later, they began offering language-learning services, although publisher royalties cut into their profits.

“We did pretty well with both endeavors, but we weren’t knocking down any doors,” says Jason, 34. Then, in 2007, the brothers consolidated the two business ideas and created Mango Languages, which offers language-learning products over the Internet through subscriptions and software packages. A consumer-orientated website called Mango Passport was launched in November.

Based in Farmington Hills, the company’s origin only came about due to technological advances. It helped that a competitor discontinued a line of online language offerings soon after Mango was up and running.

“By building our own software, we no longer had to pay publisher fees,” says Jason, who speaks five languages. “Plus, the technology in 2007 was such that we could offer our services to a global audience.”

Combining two separate, yet related, companies is somewhat rare. According to the U.S. Small Business Administration, about 65 percent of businesses fail after two years, and less than half make it past four years.

Schools and libraries generate most of the company’s revenue, which last year was $2.7 million. In recent weeks, Mango introduced an iPhone application that mimics many of the services on the website, such as listening to and practicing against a native speaker.

With more than 6,000 languages around the world, and 55,000 different dialects, the Teshubas say they’ve learned the lesson of not trying to be everything to everybody. “Ninety percent of the people speak 50 different languages, so that’s where we’re concentrating our business,” says Jason, Mango’s CEO.

Jason and his brother Michael, 32, who serves as CTO, are partners in the business with two friends — Michael Goulas, COO, and Ryan Whalen, chief marketing officer.

“We’ve learned some valuable business lessons along the way,” Michael Teshuba says. “Focus on your niche. Put a stake in the ground and learn how to survive. Don’t buy a $300,000 house and put a lot of pressure on yourself to perform. The other thing is to take the time to be successful.

Don’t set unrealistic deadlines. You have to learn to grow.”