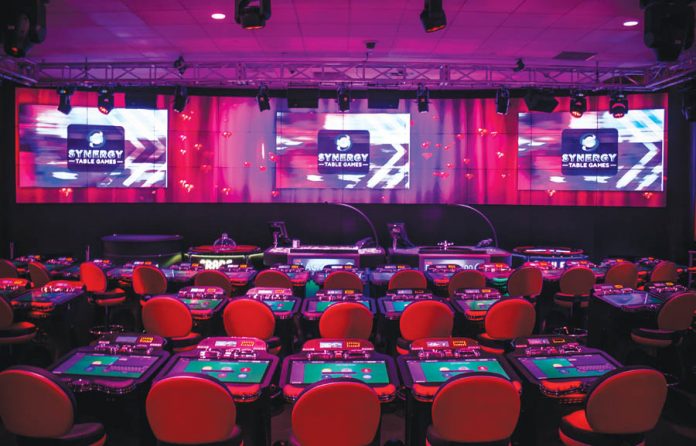 Called Synergy Table Games, the new entertainment offering combines traditional casino games like blackjack and craps with the privacy of electronic gaming. Think of it as a traditional game show on steroids.

In the Synergy gaming area, which features 48 individual play stations — all with state-of-the-art, 27-inch touchscreen displays — a pair of live dealers conduct the games. All the video displays are connected, allowing dozens of people to play several games together. “We want to be innovative and on the cutting edge of new technology,” Gregorec says, “but at the same time bring something fresh and new to our guests.”

The games, billed as an industry first, were designed by Interblock Luxury Gaming Products, a leader in the gaming industry. However, according to Gregorec, the Synergy Table Games area at Greektown is unique to Detroit.

“What we have here is the first to launch anywhere in the world,” Gregorec says. “This is a brand-new product.”

What sets the Synergy Table Games apart at Greektown is a technology called Dealer Assisted Electronic Table Games. At the front of the room, a dealer is dealing real cards for everyone sitting at the play stations. Cameras show the cards on individual play station screens, as well as on the giant screen above. Computers keep track of bets placed and winnings awarded. Gregorec says this process speeds up the games and allows the dealers to be more interactive.

“It’s all about the dealers acting as entertainers, as well,” he says. “They’re dealing live cards, so you know you’re getting the real cards. And they can really focus on entertaining; they don’t have to worry about … adding and subtracting, and watching people, because it’s all electronic.”

Synergy guests can play blackjack, roulette, craps, and baccarat, and they’re able to switch back and forth between games at any time without waiting, as well as send messages.

“We’ve tried to make something different,” Gregorec says. “We’ll have DJs come in to play music, (and) sometimes we have dancers up there. It’s pretty amazing on the weekends. It’s just another way technology can improve things for our guests.”