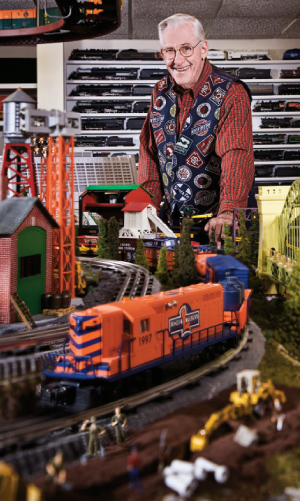 Back on track after emerging from bankruptcy following the settlement of a trade-secret dispute with a rival toymaker, model train purveyor Lionel LLC is stoking its engines for more growth. On board are one-time owner Richard Kughn, now a minority shareholder, and rocker Neil Young, whose technical skills have contributed substantially to Lionel’s entree into mainstream retail outlets.

“We have a tremendous management team, great products, and our marketing plan is better than ever,” says Kughn, right, an avid classic-car collector and former executive of Taubman Centers Inc., a luxury-mall developer in Bloomfield Hills. “Now that we’re out of bankruptcy, it’s up, up, and away we go.”

Four years ago, Lionel was looking for a growth outlet, and under the direction of CEO Jerry Calabrese it began to branch out into popular department stores such as Macy’s, FAO Schwarz, and Dillard’s. In addition, the company went back to its roots of 107 years ago when it created models of popular trains of the day.

While trains aren’t as widespread today, Lionel caught a break when Hollywood introduced several popular films in recent years that evoked the magic of rail travel. Those films include The Polar Express and the series of Harry Potter movies. “In 2004, we sold less than 100,000 starter sets, while last year we sold 200,000 sets, and a good part of that growth was re-creating trains that kids saw on the big screen,” Calabrese says. “Our revenue is also growing. In 2006, we had $63 million in sales, while last year we were at $70 million. And we’re going to grow more this year.”