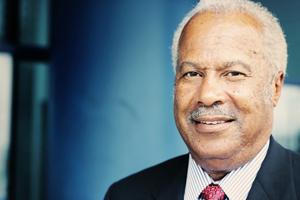 John A. James has never been one to stand still. Starting with a single truck that carted beer from Milwaukee to Detroit in 1971, James built up a $52- million enterprise of transportation, supply-chain management, and logistics companies at Fort and Clark in southwest Detroit.

James, chairman and CEO of James Group International Inc., which works with Ford Motor Co., General Motors Co., Toyota Motor Sales U.S.A. Inc., and McKesson Corp., believes the Detroit region has the potential to handle millions of dollars more in freight from Europe and elsewhere. “As more cargo is shipped on super tankers into Halifax, Nova Scotia, the region and state could create thousands of jobs if we better integrated and utilized our trucking, rail, sea, and air systems,” he says.

As it stands, James says a large amount of the international cargo moving from Canada into the United States travels through a rail tunnel in Port Huron, bound for Chicago. “The real value from freight is when you touch it, transport it, and repackage it, because that requires manpower,” James says. “But in Port Huron, we don’t touch that freight. And because all the rail operators in Chicago are spread out, you have trucks jamming the roads there to move freight back and forth to prepare it for its final destination. We have a much better system in Detroit, with four major rail operators in one location.”

Because the system wasn’t maintained over the years, James and others, including the Federal Highway Administration and the Michigan Department of Transportation, are backing a $650-million, 10-year plan to improve the Livernois-Junction Yard in southwest Detroit (now called the Detroit Intermodal Freight Terminal) as well as eliminating major “choke points” at nearby rail lines, including adding a rail tunnel between Detroit and Windsor behind the Michigan Central Depot.

The effort could create more than 4,500 regional jobs by vastly improving the transfer of shipping containers between railcars and trucks, according to a government report. Many more jobs would be added as logistics and supply chain management firms break down, prepare, and sequence the freight for delivery to major markets around the country and into Mexico.

“No one in Michigan would scoff at creating one job, let alone thousands of jobs,” James says. “We’ve lost billions of dollars in potential freight revenue (since the St. Clair Tunnel connecting Port Huron to Sarnia opened in 1994). We could also better use our shipping docks in this effort, as well as Coleman A. Young International Airport, Detroit Metropolitan Airport, and Willow Run Airport.”

In recent months, MDOT has reached an agreement with participating railroads — Canadian Pacific, Canadian National, Norfolk Southern, and CSX — on a shared funding plan to improve the Detroit International Freight Terminal. It also is nearing completion of the design of a rail bridge over Junction Avenue. The synergy of improvements, James says, will allow Detroit to be the global freight hub of the Midwest. db