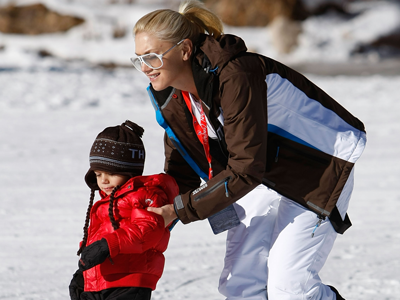 Don’t stop if you’ve heard this before: Boy meets girl, they get married, have two kids, and live happily ever after. For Lynn and Harald Husum, it really happened like that — she’s from Huntington Woods; he’s from Norway — but along the way, they developed one of the fashion world’s hottest clothing lines.

After a chance meeting in Guatemala, Harald and Lynn traveled the world, got married, and settled down in the SoHo district of New York City. Following 9-11, Lynn, a family nurse practitioner, was supporting the couple, while Harald, an art director by trade, had trouble finding work. After taking a silk-screening class, Harald began creating designs for T-shirts and other children’s clothing on the dining-room table.

“Harald just started making cold calls at various stores in New York,” Lynn recalled during a recent visit to Royal Oak (her parents still live in nearby Huntington Woods). “He actually picked up several accounts, in part, I think, because he was a tall Norwegian gentleman with an accent. Four months later, we went to our first trade show and got 30 accounts.”

That was in 2003. Total revenue for the year was $10,000. Today, the couple’s Appaman label (named after a monkey doll Harald played with as a child) offers shirts, pants, coats, and other kids’ wearables (up to size 8) in more than 800 stores in the United States, 150 in Canada, 80 in Europe, and numerous outlets in Japan, China, South Korea, Australia, and, soon, Brazil. Revenue last year was more than $2 million.

“When I started making the designs,” Harald says, “it wasn’t something that we thought could turn into a livelihood. But it really caught on. At first, we started with clothes for newborns to 2 years old, and it was those first stores that kept asking for bigger sizes.”

While the couple has done well, Harald and Lynn both admit that they’ve been helped along in recent years by the wave of celebrities who’ve started families, such as Angelina Jolie, Gwyneth Paltrow, Liv Tyler, and Gwen Stefani.

“In some cases, we send catalogs to the more-well-known celebrities because it can be difficult for them to shop,” Lynn says. “Whatever we’re doing, it’s working. We’ve averaged 40 percent revenue growth since we started, but things have slowed somewhat, of late, given the economy.”

Because the fashion industry can be fickle, the Husums feel they must constantly reinvent the brand. “We have to be fresh and hold the line on cost increases,” Lynn says. “We like to be in the mid-range in the high-end places like Neiman Marcus and Barneys. We’re also looking at starting a shoe line, as well as co-branding opportunities. We hope to have the shoe line out next year.”