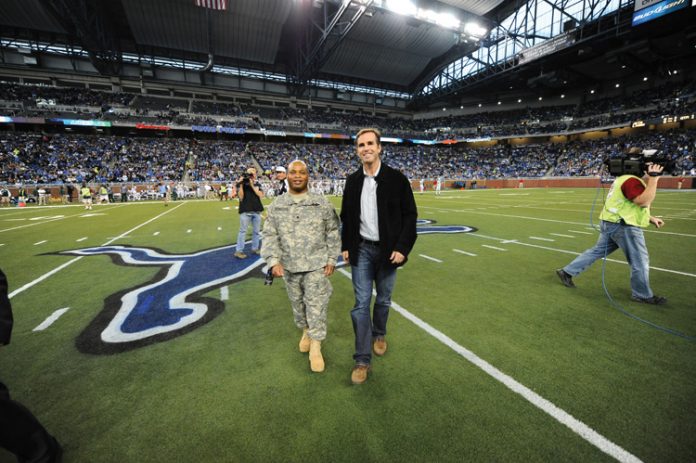 The latest chapter in the remarkable life of Bob Woodruff, a correspondent at ABC News, is taking place in Beijing. There have been many stops along the way for the well-traveled journalist, and Woodruff is quick to point out his love of exploring is all because of the distinctive experience he had at Cranbrook School in Bloomfield Hills some 40 years ago.

“It’s where I developed my wanderlust,” he laughs. “Maybe it was given to me or I just grabbed it, I don’t know. But that’s where I learned to really think more in-depth. If you grow up in a place that is removed or insulated, and you start reading about things you’re willing to think differently about, I think you want to travel.”

Woodruff’s journey began in Bloomfield Village, where he not only vividly remembers the neighborhood of his youth, but also can pass along directions to the street where he grew up. “You go north on Cranbrook, past Seaholm High School,” he says, “then past Maple Road. Amberly Road is right there, between Seaholm and Covington Middle School.”

The 54-year-old Woodruff has fond memories of living on Amberly and the simple life he enjoyed in the late 1960s. “We wandered the streets freely,” he says. “It was pretty cool — empty lots everywhere, not developed like it is now. There were dogs all over the place, chasing cars. Lots of sports going on, too. We had our own football team on our street, one street of Catholic guys playing against another. A lot of them ended up going to Brother Rice High School.”

Woodruff’s goal was to play baseball at Cranbrook. “I was a baseball freak,” he says. “I was a catcher. And I remember in ninth grade I threw the ball down to second base as a guy was stealing, and just at that same moment the coach was running across the field, right behind the pitcher, and the ball hit him in the head. The next day I was cut.”

“I had an awesome black Lab named Shannon,” he says. “Shannon loved to play catch with a ball and I was just so tired of having slime on my hands, I picked up a lacrosse stick and started using that to throw the ball with her. And I just did it endlessly.”

It clearly paid off. By the time Woodruff graduated from Colgate University in 1983, he had amassed 184 points (131 goals and 53 assists) playing lacrosse, and that number remains third in school history on the all-time scoring list. Then it was on to the University of Michigan Law School in Ann Arbor. “I guess I always loved debate,” Woodruff says, “and law was a great form of debate. I also think it’s a great way to develop the brain.”

He graduated from law school in 1987 and was doing M&A work in the New York law firm of Shearman and Sterling, seemingly headed for a comfortable career as a lawyer.

“Then one day that October, the market collapsed and dropped 22 percent,” he says. “Nobody was doing M&A, and I was so bored. I’d studied Chinese when I was at law school, and I was infatuated with China, so I shocked the people at the firm. I told them, ‘I know I’ve only been here eight months, but I want to take a year off to go teach law in China.’ And they said OK, go for it.”

Woodruff and his wife, Lee, had been married just two days in 1988 when they left for Beijing. While there, the young couple had barely settled into their new life when the Tiananmen Square protests erupted in 1989. “That was (an influential) moment in life for me and my wife,” Woodruff says, “and (we’ll never forget) what we witnessed in terms of the Tiananmen Square massacre. It changed my life completely. I was hired by CBS as a driver. I wasn’t fluent in Chinese, but I spoke the language well enough to get them around town.”

Later that same year, he and Lee returned to the United States and Shearman and Sterling’s office in San Francisco, where Woodruff fully expected to resume his legal career.

“I thought I was going to fall in love with law practice when I came back from Tiananmen Square,” he says, “but I didn’t. And I couldn’t stop thinking about what I experienced with CBS during that time in China. And I knew I really wanted to go back and do what seemed to be a great dream job and be a journalist. We had a brand-new son. I would have to take a gigantic pay cut, but I told Lee, ‘I think this is the time in my life that I feel free to do it.’”

Lee Woodruff was all in. “She was so open to it all,” Woofruff says. “She’s been remarkable. So I took that gigantic pay cut, became a journalist, and never looked back.”

After working at several local stations, Woodruff joined ABC News in 1996, embarking on a 10-year reporting odyssey that took him around the world covering everything from the U.S. Department of Justice in Washington, D.C., to wars in Yugoslavia, Afghanistan, and Iraq. It all culminated in December 2005, when he was designated as the successor to the late Peter Jennings in the anchor chair for World News Tonight. “I had my wife and four healthy children,” Woodruff says, “and a great job I never thought I’d ever have. Yeah, I’d definitely reached the peak.”

And then, barely a month later, everything changed.

On Jan. 29, 2006, Woodruff and his cameraman, Doug Vogt, were covering the Iraq war. They were traveling in an armored vehicle when an improvised explosive device struck the vehicle. Both men underwent extensive surgery for head injuries caused by shrapnel and rocks.

“Within 37 minutes of the explosion, we were taken by helicopter (to the hospital), where the surgeons removed part of my skull so my brain could breathe,” Woodruff says. “What they accomplished is shockingly amazing. They literally thought I was dead, but it didn’t stop them (from trying). And I lived. I was out for 36 days in a coma. My cameraman also had a shattered skull, but he was able to wake up.”

Woodruff’s recuperation at Bethesda Naval Hospital in Washington was long, arduous, and near-miraculous: He was back at work just eight months later, working on a documentary about his life-altering injury and a recovery made possible, in large part, because of the unwavering support he received from his family, friends, and colleagues.

“They all saw examples of people on that same floor with the same wounds I had,” Woodruff says, “but they weren’t getting the same kind of love, attention, and care I was getting. So my wife and brothers said, ‘We’re going to do something about this; let’s start a foundation and do everything we can to make sure these wounded soldiers get everything (Bob) did, so people don’t forget who they are and what they’ve contributed to our country.’ ”

The result is the Bob Woodruff Foundation, a nonprofit founded in 2006 and dedicated to creating positive outcomes for wounded, ill, and injured veterans, service members, and their families.

“We’ve raised $30 million-plus so far,” Woodruff says proudly, “trying to fund as many of these great organizations around the country to help those who’ve been wounded in Iraq and Afghanistan. We’ve got such a split country; less than 1 percent is serving in these wars. I got to know some of them before my injury, covering stories, but never as part of the tribe. One of the greatest things about getting wounded is I get a chance to become part of that world with them. The foundation has continued to grow, and we’re never going to let it go.”

It’s been just over 10 years since Woodruff suffered his injury — a milestone all his fellow survivors acknowledge in similar fashion. “We call that the ‘alive day,’ ” Woodruff says. “It’s the day where you actually lived. It’s not something we celebrate, but it’s certainly a day we can’t forget.”

Now Woodruff has come full circle, and is back in the same place where his nomadic journalistic career was born. Beijing is a world away from Detroit area, but Woodruff’s connection to his Motor City roots is stronger than ever, thanks to his 22-year-old daughter, Cathryn. She moved to Detroit last year after graduating from college, taking her first job
with a startup.

“I’ve never told her this,” Woodruff says, “but she’s one of those who saw Detroit for what it is — a place that rebounds, recovers, and grows, with great opportunity. And she wanted to do it. I had no influence on that.”

Well, maybe no direct influence. But Cathryn is clearly a chip off the old block and is motivated to come to Detroit by the same wanderlust that inspired her dad to leave the city all those years ago.

“When I left Detroit at the end of the ’70s, I thought it had peaked,” Woodruff says. He pauses here, seeming to roll back the decades, reflecting on those early days on Amberly Road, where a young boy first realized all the possibilities life can offer. “I wanted to go somewhere else,” he continues. “But Detroit’s such an amazing place, I could move back there tomorrow.”