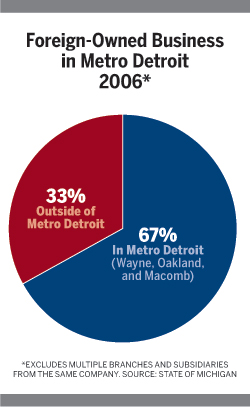 Stop at a 7-Eleven lately? Get your haircut at Bo-Rics? Shop at Borman’s? Well, your 7-Eleven sale was recorded by owners in Japan, Bo-Rics by owners in Canada, and Borman’s by owners in Germany. For a few years, of course, our Chryslers were made by a German-owned company, and it’s no surprise that the British own BP gas stations, but I’ll bet you didn’t know it’s the French who keep the lights on for us at Motel 6.

Many observers think that too many foreign companies own too much of America. But years ago, all investment here was “foreign.” In 1701, a French officer by the name of Antoine de la Mothe Cadillac called his new settlement connecting two great lakes Fort Pontchartrain du Detroit. French companies are still major investors here today, and Detroiters look at Canada, the second largest investor in Michigan, every day.

Today, about 201,000 Michiganians get their paychecks from foreign-owned companies. So could more of them pose a business opportunity for Michigan? “We put a great deal of work into recruiting companies from around the world,” says John Carroll, executive director of the Detroit Regional Economic Partnership, the economic development arm for the Detroit Regional Chamber. “Once they set up operations here, there are a host of services, technology, and raw materials they need that companies here can provide. In effect, it’s a win-win scenario.”

Over the last seven years, the Partnership has recruited more than 350 foreign-based companies to the 10-county region that makes up southeastern Michigan. The Partnership reports the companies have collectively invested $1.5 billion in new development, and created 8,650 jobs. Officials from Michigan Economic Development Corp., a quasi-public agency in Lansing that recruits companies to set up operations around the state, report similar results.

Michigan is part of a national trend. In 2006, foreign-owned firms invested $173 billion in capital assets in the United States (not in securities or bank accounts). This was not as much as the $314 billion invested in 2000, but still a significant portion of total investment in the United States. Since 1996, foreign-owned companies have invested $1.6 trillion in American capital assets, according to the U.S. Bureau of Economic Analysis.

Foreign companies invest more in manufacturing than any other sector of the U.S. economy. In 2006, manufacturing attracted 39 percent of foreign investors, more than twice as much as wholesale trade (15 percent), and finance and insurance companies (15 percent). Banks attracted 9 percent (not deposits), information technology (6 percent), and professional, scientific, and technical services (3 percent).

Michigan, and especially Detroit, has a well-established network for international trade and investment. Foreign trade commissioners, consulates, and honorary consuls help foreign companies study their markets and meet key service providers. The State of Michigan, universities and colleges, chambers of commerce, cities, and trade and economic development groups have a long history of providing service to foreign companies.

In turn, the state has proved to be a good place to find new customers from foreign countries. Michigan ranks ninth in the United States for employment by foreign-owned companies, and is one of 10 states with 200,000 or more employees who owe their jobs to overseas businesses, according to the Bureau of Economic Analysis.

What companies from what countries are likely targets for business opportunities? Every region in the United States has a different profile of countries and industries investing from other countries. Michigan’s profile is heavily influenced by the auto industry. So it’s no surprise that South Korean auto suppliers have recently made South Korea one of the “Top 10” countries with foreign-owned businesses in Michigan. But the state attracts investment from other industries, as well.

Japan leads the list of countries with foreign-owned businesses in Michigan, with over 300 wholesale, retail, manufacturing, and service enterprises. Canada and Germany rank second and third, respectively, with more than 200 firms, while England and France have 100+ firms, ranking fourth and fifth, respectively. The Netherlands, Switzerland, Sweden, Italy, and South Korea round out the top 10.

While companies from Japan, South Korea, and Australia are significant investors in Michigan, most of the “Top 10” countries are in Europe, which continues to dominate the list of regions investing in the United States. Last year, 70 percent of all foreign direct investment in the United States came from Europe, while companies from Asia and the Pacific accounted for 15 percent of the total, and Canadian firms 9 percent.

Working with foreign-owned companies is big business for international groups at banks and professional service firms, and it’s critical to freight-forwarders and others who owe their success to foreign trade and investment. You may still hear about people who worry about the growth of foreign investment, but most cities and towns welcome the new jobs and the resulting increase in tax revenue from “foreigners.”

Brenda Schneider, first vice president and director of business and development services at Comerica Bank in Detroit, says Michigan has a wealth of talent and knowledge about international business, and that the network of people involved in internationasl trade and investment is growing. “We’re in a global economy, and we certainly encourage foreign investment here because it helps everyone,” she says. “Foreign investment in Michigan represents a business opportunity, no question.”