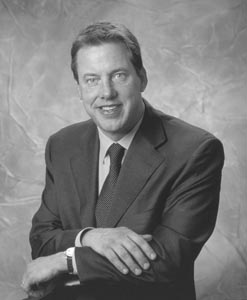 In 2010, Ford gained U.S. market share and was able to sell its cars and truck at higher prices. In October, the automaker made a final payment to the UAW’s retiree health care trust fund. The automaker recently introduced the 2011 Ford Explorer.

A member of the company’s board of directors since 1988, Ford was elected chairman in September 1998 and took office Jan. 1, 1999. He also serves as chairman of the board’s Finance Committee and as a member of the Environmental and Public Policy Committee. He held the position of CEO from October 2001 to September 2006. Ford joined the company in 1979 as a product-planning analyst, and has held a variety of positions in manufacturing, sales, marketing, product development, and finance. Ford was part of the company’s national bargaining team during the 1982 contract negotiations with the UAW, became chairman and managing director of Ford Switzerland in 1987, and was elected to Ford’s board of directors in 1988. He led business strategy for the Ford Automotive Group beginning in 1990, and was appointed general manager of the climate-control division in 1992. He was elected a vice president in 1994, and is the great-grandson of company founder Henry Ford.

Mulally joined Ford in September 2006, and has championed the automaker’s ONE Ford turnaround plan, which focuses on restructuring the company to adapt to changing demands, accelerating the development of new products, improving the balance sheet, and encouraging better teamwork throughout the entire company — from executive committees to the plant floor. He also has pushed for streamlining the company’s global design and engineering activities while enhancing the product lineup with cars like the 2010 Ford Taurus and the 2011 Ford Fusion Hybrid and Fiesta, and boosting manufacturing productivity. Before joining Ford, Mulally was executive vice president of Boeing Co. and president and CEO of Boeing Commercial Airplanes. In that role, he was responsible for all of the company’s commercial airplane programs and related services. Mulally was named Boeing’s president of Commercial Airplanes in September 1998, and CEO in March 2001.

Fields is responsible for all development, manufacturing, marketing, and sales of Ford, Mercury, and Lincoln vehicles in the United States, Canada, Mexico, and South America. He was formerly executive vice president of Ford of Europe and the Premier Automotive Group, and was president and CEO of Mazda Motor Corp.

Appointed in April 2008, Brown is responsible for more than $90 billion of production and nonproduction procurement for Ford operations worldwide. He had been senior vice president for Global Purchasing since September 2004. He has set a standard of working with trusted suppliers while fostering better relations.

Appointed in April 2008, Cischke is responsible for Ford’s long-range sustainability strategy and environmental policy. The company’s Blueprint for Sustainability strategy sets the path for the implementation of technology across Ford’s global product lineup to achieve a 30-percent reduction in CO2 emissions by 2020.

Effective Aug. 1, 2010, Farley became the company’s most senior marketing executive. His appointment marks the first time Ford has had a single global leader for marketing, sales, and service. Since joining the company in 2007, Farley has led Ford’s drive to offer integrated global marketing, advertising, and digital communications.

Fields oversees performance management, compensation and benefits, organization development, recruiting, and leadership and professional development. She is also responsible for corporate security and travel. She serves on the board of directors for the National Action Council for Minorities in Engineering.

Fowler, who was appointed in March 2010, is responsible for driving quality processes and discipline throughout the design and production of Ford vehicles. He is also accountable for new-model launches globally, and for ensuring alignment with product development, manufacturing, purchasing, and marketing.

Hinrichs, appointed Nov. 1, 2010, oversees all of Ford’s operations and partnerships within the Asia Pacific and Africa region, including Mazda. He was group vice president, global manufacturing and labor affairs, responsible for the operations of 105 assembly, stamping, and powertrain plants worldwide.

Kuzak is responsible for all aspects of Ford’s product development system. He reports to Alan Mulally and Mark Fields. Kuzak took on the global role in December 2006. Before that, he was vice president, North America engineering. Kuzak’s team is charged with bringing more products to global markets with greater efficiency.

Mays is responsible for shaping the global design direction of the Ford, Lincoln, and Mercury brands, and for creating long-range strategic design visions that support the worldwide ONE Ford business model. He has led the development of significant concept vehicles including the Ford Interceptor, Shelby GR-1, and “427.”

Appointed in August 2010, Odell leads the team responsible for producing, selling, and servicing Ford vehicles in 51 markets, as well as Ford’s Export Operations & Global Growth Initiatives. Earlier, as Ford vice president and president of Volvo Car Corp., Odell led Volvo back to profitability and helped sell the company to Geely.

Oversees all aspects of Ford’s international governmental relations, including trade strategy and political risk assessment. He was a national security adviser to Senate Majority Leader Bill Frist of Tennessee. In this capacity, Biegun provided analysis and strategic planning for the Senate’s consideration of foreign policy, defense, and intelligence matters; among other duties.

Effective Jan. 1, 2011, de Waard will be responsible for all marketing, sales, and service and personnel and activities in European markets. He reports to Stephen Odell, chairman and CEO, Ford of Europe, and Jim Farley, group vice president, global marketing, sales and service. He had been vice president of sales for Ford of Europe. He replaces Ingvar Sviggum, who retired.

Graziano, appointed to his new position Nov. 1, 2010, leads the expansion of Ford’s model lineup in Australia and the market launch of the all-new Ranger pickup truck, one of Ford’s most important new products. Graziano has held a series of leadership positions in the Americas, Asia, and Africa, including his most recent role as chairman and CEO of Ford Motor (China) Ltd.

Oversees labor policy and negotiations covering Ford’s hourly employees worldwide. He also has responsibility for health care management and collective bargaining. He reports to John Fleming, group vice president, global manufacturing. Mulloy has held a variety of positions in labor relations and personnel planning for various divisions of the company, including Ford Credit.

Effective Jan. 1, 2011, Nair oversees all engineering for car, truck, SUV, and crossover vehicles for the Ford, Lincoln, and Mercury brands. He is charged with developing new vehicles by leveraging common global platforms and components. Prior to this, Nair served two years as vice president, operations of Ford’s Asia Pacific and Africa region, where he has numerous duties.

Macfarlane oversees the operations of 21 assembly, stamping, and powertrain plants in Europe, with a focus on implementing flexible, efficient manufacturing practices throughout the region. Before joining Ford of Europe, Macfarlane was the director of Ford’s truck manufacturing operations in North America, where he was responsible for the manufacturing and quality.

Schloss has overall responsibility for Ford’s treasury operations. Most recently he served as assistant treasurer. He joined the Treasurer’s Office at Ford Credit in 1991, and held positions in both risk management and international financing. In 1995, he returned to Ford as manager, domestic financing, followed by the position of manager, international financing.

Shanks has extensive global experience in business strategy and corporate planning. He reports to Lewis Booth, Ford executive vice president and CFO. Prior to his current position, Shanks was vice president and controller of Ford’s Americas operations. In 2004, he was elected vice president, Operations Support, Finance and Strategy, Ford of Europe and Premier Automotive Group.

Tetreault leads Ford’s efforts to improve manufacturing flexibility and efficiency in North America as the company retools various truck factories to launch a host of smaller, more fuel-efficient vehicles. Earlier, Tetreault served as vice president of manufacturing, Ford of Europe, where he was responsible for European vehicle and powertrain manufacturing operations; among other duties.

Appointed to his position in September 2009, Toney works directly with hundreds of Ford’s dealerships around the world. He reports to Ken Czubay, vice president, U.S. Marketing, Sales and Service. Toney joined Ford in 2000 and has held numerous leadership positions in logistics, operations, and parts and service. He had worked for Caterpillar and American Honda.