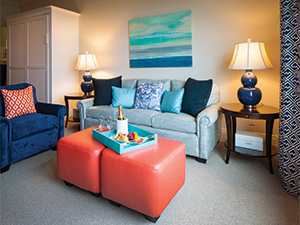 Many Michigan residents know the Inn at Bay Harbor, near Petoskey, as an accessible and magical summer vacation spot, with its sweeping views of Little Traverse Bay. Now, the 128-room Marriott Renaissance hotel, with its Victorian feel, is in the process of renovating its restaurants, suites, and all guest rooms as part of its plan to turn the popular resort into a year-round destination that’s part of Marriott’s Autograph Collection hotels.

“We came from rooms that were very summer-oriented,” says Molly Kircher, senior vice president for brand development at Boyne Resorts, the owner of the hotel. “The (new) rooms have some darker woods and softer, more elaborate window treatments, so they give that warm feeling when you come in versus the summer beach house, cool feeling.”

Kircher says that after completing renovations to the lobby and transforming the former South American-style restaurant into the Vintage Chophouse and Wine Bar, work is underway on remodeling the resort’s 35 master suites. She says the suite face-lifts will be completed by Memorial Day, along with updates to Sagamore’s Dining Room — the resort’s breakfast and event space — and a café, representing a total investment of $2 million in the 18-year-old hotel.

Kircher says by next summer, refurbishments will be completed on another set of rooms, the grand suites, and the spa as well as the fitness facilities.

“We had this vision for (the Inn at Bay Harbor) when we built it that we never quite hit,” she says. “Now we’re coming back to what was the original vision for this place — a classic summer lakeside hotel that we’re stretching into other seasons.”