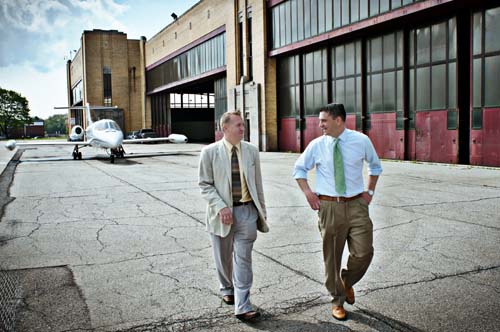 Andrew Niemczyk tried to escape Soviet-occupied Poland several times. Had the Russian government embraced the engineer’s talents instead of sending him to jail, Niemczyk and his revolutionary idea for a water drainage system may have never left Europe for Michigan when he eventually did escape.

Just as most successful entrepreneurs get their start by solving a problem, Niemczyk, 52 — who had flooding issues at his home — was looking for a way to drain water from his yard. He created a non-mechanical system that draws standing water through a series of small plastic tubes and redirects it farther down the water table.

The 20-foot-long tubes, set 12 inches or more below grade, expand and contract naturally via changing temperatures and gravitational forces.

“I developed the system in 1997 because rainwater was collecting in my backyard in Hamtramck, and it was slowly deteriorating a basement wall,” says Niemczyk, founder and managing partner of Parjana Inc. in Southfield. (Parjana is the Asian god of thunder and rain). “I had a few contractors give me some estimates, but they all had a different story — so I tackled the problem.”

In a few weeks, he installed the prototype near the basement wall, saw that it worked, and quickly forgot about it. “A couple of years later, we had standing water around our (detached) garage, and my wife was complaining that our wet feet were getting our new minivan dirty. So I fixed that, and one thing led to another.”

Today, Niemczyk, along with partners Greg McPartlin and Frank Muller, have installed more than 100 drainage systems in Michigan and elsewhere, including at Detroit City Airport and Plum Brook Golf Club in Sterling Heights. Jason Watt, director of Detroit City Airport, says the system cleared up a major standing water issue on the airport grounds. “When the water left, so did the birds, which obviously made it safer for flying,” Watt says. “We also got an access road back in use, which was always flooded.”

In most cases, the drainage system eliminates or redirects standing water within 24 hours. Because there are no mechanical parts, the product can last for years. On pace to perform 2,500 installations this year, the company is setting up a franchise system to license and install the system globally.

“In the Third World, standing water can lead to malaria and other diseases,” McPartlin says. “Our distribution model mimics what Ray Kroc did with McDonald’s. He didn’t have the best burger, but he developed the best system for making … money.” db