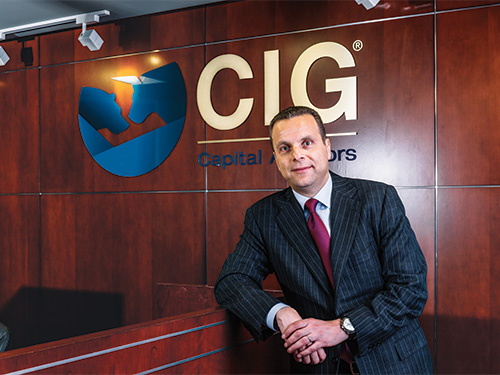 Not many businesses — let alone wealth management and capital advisory firms — are launched from a hotel room. But in 1998, tapping into $45,000 he had saved as a district manager at American Express Financial Advisors, Osman R. Minkara rented a room at the Quality Inn at 12 Mile and Orchard Lake in Farmington Hills and started CIG Capital Advisors with five employees.

“Since I had no credit established, I couldn’t rent office space in a short period of time, so the hotel room seemed like a good idea,” says Minkara, founder and managing principal of CIG Capital Advisors.

“We would start out each morning with a bagful of quarters for the phone and make cold calls (to prospective clients from the lobby),” Minkara says. “We did that for three months, until I rented a small office. And while my (Lebanese) accent didn’t help matters, it worked. Over time, we specialized in advising doctors, medical centers, physician groups, hospitals, and health care systems.”

Today, with 50 employees in Southfield, the firm specializes in three sectors: wealth and asset management, alternative investments, and business advisory services. The asset management division was launched in 2007 and, after the first year, it had $17 million in assets under management. Last year, the division reached $200 million in such assets.

Growing up in Lebanon, Minkara, 45, attended dental school, but he says he didn’t have the passion to finish. Following the advice of his brother, who was completing his residency at Wayne State University’s School of Medicine, he moved to Detroit.

After learning English in his first semester at Wayne State, Minkara took a job in the university’s archive collection, and eventually moved his way up to the finance department to complement his degree program.

He went on to earn an executive MBA from New York University and the London School of Economics, as well as an AMP (advanced management programme) degree from the
University of Oxford. After a few years with American Express, he could no longer tamper his drive to become an entrepreneur.

“Growing up in Lebanon, the electricity and water didn’t work all of the time, and then you come to America and everything works all of the time. It’s hard to explain, but it really drives you to do better,” he says. “You don’t have any excuses for not getting ahead.”