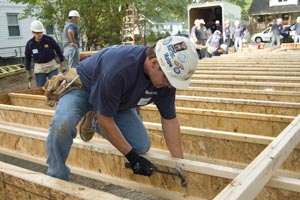 For years, Habitat for Humanity Oakland County rolled out its affordable home program with little deviation — put out a call for corporate donors, gather volunteers, build or renovate dwellings, and hand the keys over to needy families.

“We got kind of insular,” admits Brad Irwin, director of partnerships for Habitat for Humanity in Pontiac. “We kept going to the same well, but we never looked at where our organization would be in 10 years. Plus, in some cases, a small number of our homeowners were losing their homes due to job losses, medical issues, or budgeting problems.”

Instead of driving the same nail in place, Habitat for Humanity changed course. “It occurred to me and others in our organization that we had 100-plus corporate partners with a goldmine of ideas, and we needed to engage them,” Irwin says. “For instance, how could we build better houses for less money?”

In addition, a new financial education effort has reduced recipient household debt by a collective $200,000 in Oakland County. More energy-efficient and higher-quality dwellings were built, as well.