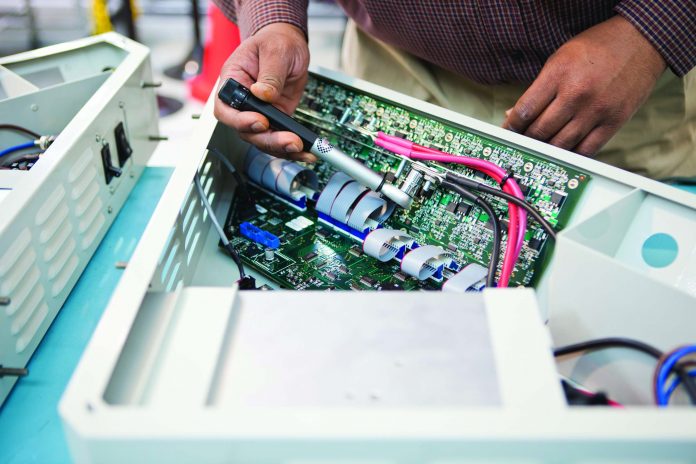 Paul Savage and his team at Detroit’s Nextek Power Systems are out to rid the world of “energy vampires” — the extra power needed to operate cell phones, appliances, televisions, computers, and dozens of other devices.

Because electricity from the nation’s grid is delivered to businesses and homes using alternating current, added energy is required to convert it to the direct current that’s necessary to power appliances and electronic devices. It’s the reason why TVs and computers, for example, generate heat.

In a bid to save electricity, boost efficiency, and improve safety, Nextek offers a direct current system to operate lights, fans, and other devices — think of it as a ceiling grid with a small amount of power coursing through it. The so-called microgrid saves anywhere from 10 percent to 42 percent of electricity, says Savage, CEO of Nextek, housed at Detroit’s NextEnergy center.

“Once a microgrid is set up, you can access power instantly,” Savage explained during a recent demonstration. “I can take a light or fan and snap it anywhere on the ceiling grid, and they turn right on.” Because the microgrid is powered by a direct current of 24 volts, it’s safe to touch.

Apart from those benefits, Savage and others in the industry are forging into the alternative energy field. Because solar arrays, wind turbines, and electric vehicles produce direct current power, converting it to alternating current so that it can be transmitted over the grid represents another opportunity to save energy.

“If a solar array produces direct current, it has to be converted to alternating current to travel over the grid. When that energy reaches your home, it’s converted back to direct current,” Savage says.

“So if you had a solar array next to your home, with the right setup there would be no switching to alternating current.”

When there isn’t sufficient sunlight to power the solar panels, Nextek’s system taps into the power grid. A typical solar installation is 89 percent efficient, Savage says, but with Nextek’s direct current offering, called “DirectCoupled,” the energy loss is only around 1 percent.

“We’re really in the infancy of this industry, but it shows a lot of promise,” Savage says. “As we scale up, most of the benefits will occur in commercial applications, including data centers. But over time, it will open up (to) the residential market.”