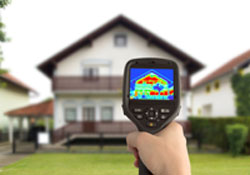 Offering residential energy audits and repair services, the duo is out to reduce some of the $28 billion Michigan homeowners spend each year on coal, natural gas, and oil. Duke and Smith initially sought to build energy-efficient homes using geothermal systems, solar arrays, and other green components.

“About 95 percent of the homes we inspect for energy leaks have an issue,” says Duke, co-owner of Go Green Energy. “We had a lady in Berkley that was using 96 percent more natural gas than a normal home of similar size. It was crazy. She had some big gaps in her attic, caused by a previous repair job.”

Part energy auditors, part detectives, Duke, Smith, and their seven-person crew inspected 150 homes last year, and they’re on pace to complete 200 dwellings this year. The audits, which cost $100 to $400 (the price is based on the size of the home), include an infrared scan of the insulation that’s behind walls and a draft test, where a large fan is set and sealed around the front door jam.

“We draw the inside air outside so we can see where the leaks are by using smoke sticks, thermal-imaging devices, and other tools,” Duke says. “We’ve found squirrels, raccoons, birds, leaking gas meters, you name it.”

Following a home’s examination, which can take two to four hours, Go Green will typically be hired to fix any problems — or the homeowner can tackle the project on their own. Duke says federal rebates and other incentives help offset some of the costs.

“Our plan is to refine the process in metro Detroit and then expand our services nationwide,” says Duke, who helped rebuild his family home using various green technologies following a fire in 2006. “When you can show people how much money they can save (in energy costs), the majority of homeowners choose to get the repairs done.” db