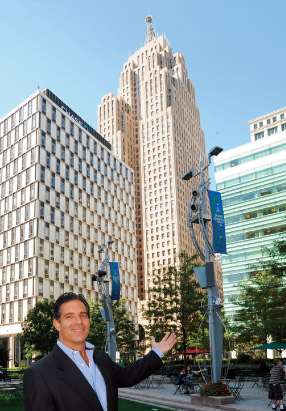 Twenty years ago, Sam Munaco had a hard time convincing companies to maintain or move their offices to downtown Detroit. But after more than $3 billion in improvements to the central business district, the response to Munaco’s recent inquiries isn’t so definitive.

“In the old days, the companies would say ‘no,’ and that was pretty much the end of the discussion,” says Munaco, associate broker and principal of Signature Associates, an office and industrial brokerage firm in Southfield. “Today, the companies typically ask ‘why,’ and I go from there.”

In recent years, Munaco has kept or lured numerous companies downtown, including the Detroit Regional Chamber, Detroit Renaissance, Dickinson Wright, Dykema Gossett, and Plunkett Cooney. Overall, he’s worked with companies that collectively represent hundreds of workers and more than 750,000 square feet of space, making him one of the most active brokers downtown. His clients include law and accounting firms, financial institutions, and insurance agencies.

He adds that some downtown firms, lured, in part, by public incentives, are in turn offering perks to entice workers to be downtown.

“Obviously, the office market is soft due to the economy,” he says, “but there are opportunities.”