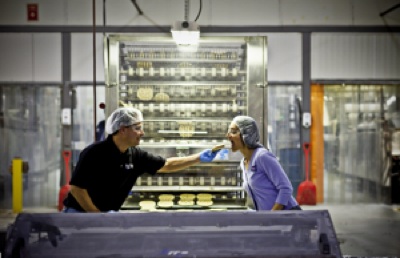 When Mike met Stacey at Michigan State University in the mid-1980s, they weren’t prepared to build a food company from scratch. Following graduation and a wedding, the pair hoped to put their hard-earned marketing degrees to work.

“Stacey’s Italian side wanted to get into food, so we opened the Y&S Deli in Ann Arbor (in 1989),” says Mike Marsh. “Our idea was to open a few delis and then start franchising. One thing we had going for us was that we were doing rolled, wrapped sandwiches before anyone else.”

When the wraps proved popular — Stacey landed a contract to supply the wrapped sandwiches to Northwest Airlines — the couple could almost taste success. But while they were raising funds to expand, an attorney suggested they needed to beef up their supply chain. As it stood, the deli wraps came from a small factory near Fresno, Calif.

“So one of us had to learn to bake,” Stacey says. “Our deal was that I would sell, and Mike would bake.”

After attending a two-day seminar at the American Institute of Baking, Mike learned from a friend that Tyson Foods was selling equipment for a tortilla production line. So he got behind the wheel and drove to the food giant’s headquarters in Springdale, Ark.

“I had no idea what I was buying, but I figured we could make a go of it,” he says. He paid $60,000 for the equipment, loaded it on five semi-trailers, and moved it to a 5,000-square-foot warehouse in Ann Arbor. It took three years to set up the 100-foot-long line and get it running.
“During all that time, we grew to four delis,” Mike says. “Our Visa cards were maxed out. We got in so deep that the only thing we could do was keep going.”

After catching the attention of McDonald’s regional headquarters in Southfield, Stacey secured a contract to supply wraps to the fast-food chain’s Canada operations. Meijer soon followed, as did other grocery operations. But cracking Wal-Mart, the world’s largest retailer, proved formidable for the couple.

“We got into the Howell Wal-Mart, and we ran deliveries out there ourselves. But getting into their distribution system was difficult,” says Stacey, president of Flatout Bread Co. “Finally, I found a guy in Bentonville (Wal-Mart’s Arkansas headquarters), and we got into 80 stores. When we got in all of their stores (in late 2002), I remember calling Mike from the stairwell at Wal-Mart and saying: ‘I bagged the elephant, start baking.’ ”

Pondering the challenge of supplying multi-flavored breads to 2,500 stores, Mike, a Flatout vice-president, was suddenly overwhelmed. There was little money for ingredients. “Did you get a P.O.?” he recalls asking his wife. It arrived a week later.

Soon, Flatout outgrew its Ann Arbor facility. Today, the 140-employee business operates four baking lines from a 35,000-square-foot factory in Saline. Available in 12,000 retail outlets in North America and the Caribbean, the company is growing an average of 20 percent a year.

“I see a passionate management team, great distribution, and new products,” says Jason Duzan, managing director of Glencoe Capital, a private equity firm in Birmingham, and a Flatout investor. “There’s a lot of opportunity for growth, especially when you can add products to existing locations.”