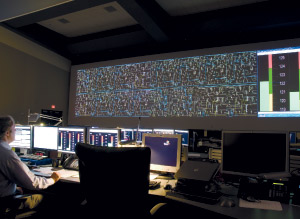 Anyone who’s ever visited a design studio knows that resolution is everything — but so is cost and performance. So when Pat Hernandez, president of Immersion Graphics Inc. in Commerce Township, introduced an ultra-high-resolution projection system at a third of the cost of the previous technology, it drew almost immediate attention from consumer-oriented corporations like Ford Motor Co., Gulfstream, Herman Miller, and ITC Holdings Inc.

Consider the computer-design industry established a notable advancement with the introduction of high-definition projectors a decade ago that offered 2.1 million pixels of resolution. But with the recent introduction of what’s known as the Sony SXRD 4K projector, or 4K for short, visual clarity jumped fourfold to 8.8 million pixels of resolution. In addition, prices dropped dramatically.

“When we built a power wall (a large display screen) at Delphi in 2000, the system cost around $1 million,” Hernandez says. “Today, with the new 4K technology, it would be around $300,000 to $400,000. And you get four times the resolution.” The custom builder of data and visualization systems offers applications in industrial design, engineering, 3-D modeling, and large-scale offerings for command-and-control rooms. The system is being introduced to the movie industry, as well.

At Ford, Hernandez and his 20-person staff installed a series of 4K systems at the automaker’s main design studio in Dearborn. Through the use of sophisticated 3-D computer graphics, Ford designers have tapped the technology to plan every aspect of the vehicle-assembly process long before the first order for a new model arrives on a factory floor. Not only is a new car or truck designed more quickly and with less work, but the new system keeps potential problems from entering the mainstream market.

“We’ve really seen a dramatic decrease in the number of new-car warranty claims at our dealerships,” says Richard Zavodsky, Ford’s virtual build leader. “I’m not at liberty to share the specific numbers, but I can assure you the gains have been significant. And in my opinion, we’re really just scratching the surface.”

Other applications have achieved similar results. When ITC Holdings recently opened a heavily secured headquarters in Novi to monitor an elaborate system of electric grids it owns and operates across the Midwest, it turned to Immersion Graphics to design a control room equipped with a 2,800-square-foot power wall. With previous technology, ITC Holdings would have used 100 display cubes to equip the control room, but the new system used 14 Sony SXRDs, which improved visual quality dramatically while reducing costs by around 70 percent.

Still, Immersion Graphics has its share of challenges. The company’s large-scale installations aren’t for everyone. “We’ve had clients ask for a smaller system, both for an original installation or as a way to complement a larger system in the same company,” Hernandez says. “What we’ve done is develop a smaller mobile system that can be wheeled into a conference room. The system can handle everything from a multimedia presentation to video-conferencing. It’s been a good avenue of growth for us.”