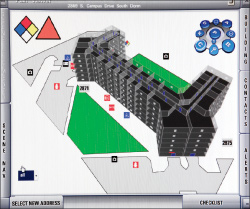 Talk about old school. For years, fire commanders have created simple line drawings of large campuses and industrial centers that contain hazardous materials. Not only were these paper plans cumbersome, they could be misfiled or misplaced — and they weren’t easily shared with other safety personnel.

Enter Birmingham-based Viewpoint Command Systems, which created an easy-to-use software package that provides firefighters, for example, with digital maps, 3-D floor plans, and active alerts for hazardous materials, medical dangers, and structural problems. Using a laptop equipped with the $1,100 software package, a firefighter can also indicate the location of fire hydrants, a structure’s entrance and exit points, ductwork, and drains.

“The first 15 minutes are crucial when responding to any type of accident or attack,” says Gilbert C. Cox Jr., principal of Viewpoint Command Systems, along with local restaurateur Herb Abrash and others. “It’s important that emergency responders have all the information at their fingertips, because if you go into an area that houses lithium and you start spraying water, there’ll be a huge explosion.”

The system, called PrePlanView, has a touch-screen interface and doesn’t require a network connection to operate. The mobility of the system allows for quick inputs and changes, whether at a fire station or out in the field, says Troy fire chief Bill Nelson.

“We’ve completed around 200 building surveys from among 3,000 structures, and so far the system is working very well,” Nelson says. “Fortunately, we haven’t had a major incident, but we’re much better prepared if we do.”

In addition, police officials can use the software to identify escape routes if a building has been seized or in the event of a hostage situation. “During the Columbine High School attack (in 1999), the safety personnel on the ground were asking the students where the cafeteria was because they needed to shut off the alarms,” says Viewpoint operations manager Rich Politi. “One advantage of our software is that it can be shared across multiple disciplines, whether it’s fire or police officials, the U.S. Coast Guard, or Homeland Security.”

In addition, Viewpoint is working to integrate small, GPS-type monitors with the software package so that unit commanders can track and view the live activities of a fire or security team. “We’re also looking at offering the system to building inspectors,” says Viewpoint president Les Frahm. “Since we started two years ago, we’ve taken on 28 communities, and [we’re] in discussions with 15 more. Perhaps the best thing we did on the marketing side is to attend as many fire, security, and law-enforcement conventions as possible. Once safety officials see the system, they want more information.”