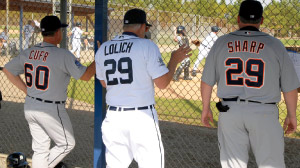 In late January, more than 200 Tigers fans, including a company president, a physician, an auto dealer, a Catholic priest, and a sewage operator will play baseball with members of the 1984 World Champions and other Tigers greats at one of two weeklong fantasy camps in Lakeland, Fla.

At a cost of $3,450, the experience of wearing the old English D and playing baseball for a week in sunny Florida with Dan Petry, Darrell Evans, Willie Horton, Mickey Lolich, and 23 other former Tigers offers a once in a lifetime experience that at the very least will create some unique “war” stories to be shared at the water cooler.

Yet for some, like Chuck Helppie, the 57-year-old president of Echelon Wealth Management in Ann Arbor, the Tigers Fantasy Camp has become a cherished “same time next year” phenomenon that has created lasting friendships.

“You can always go on a cruise or go to a resort, but the ability to play baseball all week with a bunch of your idols and make some new friends along the way has made it a very special vacation,” says Helppie, who has attended every year except for one since Detroit native Jerry Lewis and current announcer and former Tiger Jim Price created the Tigers Fantasy Camp in 1984.

Lewis, 63, a lifelong, rabid Tigers fan, first envisioned the camp in 1983 after reading an article about a Chicago Cubs Fantasy Camp in Arizona, the first of its kind.

The wholesale clothing representative then brought the idea to Price, his former colleague at Michigan Consolidated Gas Co., who in turn set up a meeting with then Tiger President Jim Campbell to seek permission.

“I’ll never forget sitting in his office and giving my little speech, when a phone call came in from Expos President and General Manager John McHale Sr.,” says Lewis from his Comerica Park office, where he serves as director of the Detroit Tigers Fantasy Camps.

“Instead of taking the call he kept listening, and that got my adrenaline going. Sure enough, he gave us phone numbers for the uniform company and the person in charge of renting Henley Field in Lakeland.”

For 25 years, 4,000 Tigers fans from around the world have participated in the camps, including GM Vice President Gary Cowger, former Visteon Chairman Pete Pestillo, gubernatorial candidates, judges, and blue-collar workers. Remarkably, despite the cost, and as a tribute to its success, 40 percent of all participants whose average age is 52 (ranging from 21 to 82) are repeat campers.