Life Remodeled is bringing hope to blighted areas under the leadership of CEO and founder Chris Lambert — a former pre-law student who traded his self-centered ambitions for the “radical new adventure of remodeling Detroit, one neighborhood at a time.”

Following college, Lambert spent nine months in Liberia helping villagers build a well and a school — and battling malaria. When he and his wife returned to the United States in 2007 and settled in Michigan, he launched Life Remodeled, with the vision of sharing his overseas experiences with a broader community. From 2010 to 2013, the volunteer group built houses for needy families in five metro Detroit neighborhoods. Each house was constructed in six days, using donated labor and materials. 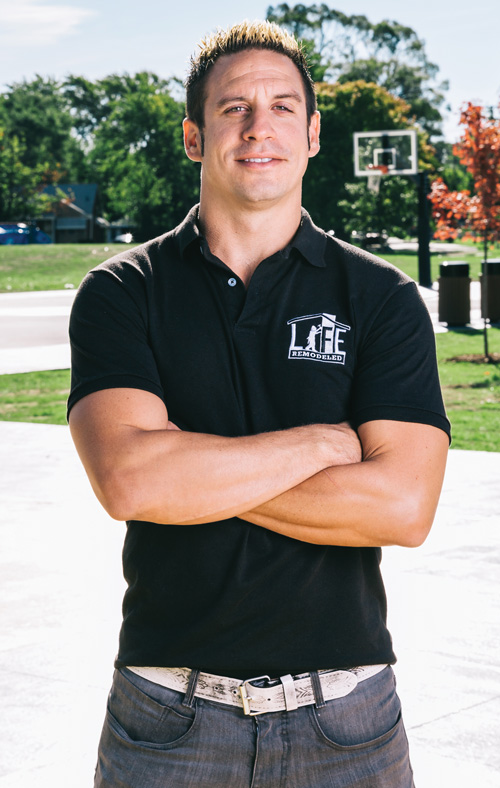 In 2014, Lambert decided to shift Life Remodeled’s focus to Detroit’s public schools. In August of that year, with 10,000 volunteers, he partnered with the Cody Rouge Community Action Alliance and other donors to build new STEM and medical simulation laboratories — along with a $1.2 million football field — at Cody High School, on the city’s far west side.

A year later, 9,500 volunteers worked on projects in and around Osborn High School on the city’s east side. Their accomplishments included installing a new roof and a gym floor. Volunteers also boarded up 726 derelict houses and cleared debris from more than 600 blocks around the two schools. Lambert estimates the value of each project at $5 million.

“In each community in which we invest, we look for two things: significant need and radical hope,” he says. “Our goal is to discover the community’s needs and vision, and come alongside and assist them.”

Lambert says Detroit Police Department statistics show that crime in the Cody Rouge neighborhood dropped in 10 out of 11 categories, including a 47 percent reduction in homicides, one year after the completion of Life Remodeled’s project.

This past August, more than 10,000 volunteers, including people from 200 businesses, installed landscaping, play structures, basketball courts, and a community center at Skinner Park, adjacent to Denby High School on the city’s east side. Valued at $1.4 million, the project was designed by Denby students.

The team also remodeled 80 homes, boarded up 362 empty houses, and cleared debris from 303 surrounding blocks. Randazzo Heating and Cooling in Macomb Township donated 20 furnaces for the homes, and Parjana Distribution in Detroit provided a $50,000 system to manage stormwater runoff in the park.

“Chris Lambert’s energy is infectious,” says Greg McPartlin, CEO of Parjana. “He’s truly a visionary guy. I like people who are driven to make the impossible happen, and that’s what Chris does.”

Detroit Mayor Mike Duggan says Life Remodeled makes it possible for businesses and communities to work together. “It’s the kind of thing that government wouldn’t have been able to do, and now Life Remodeled has enormous credibility with the business community as well as the neighborhoods,” he says. “I wish there were five more Life Remodeleds.”

Life Remodeled’s 2017 project, at Central High School, will include the installation of a technology incubator where students can rub elbows with successful entrepreneurs. Lambert says he hopes to eventually expand the nonprofit’s work beyond Detroit. “I believe we’re at a place now where we really are doing this with excellence,” he says. “We’re definitely open to invitations to major urban areas like Indianapolis or Houston.”