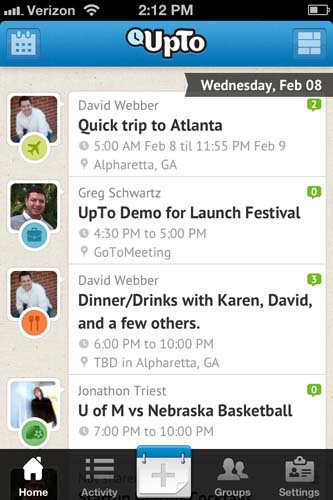 If Ford Motor Co. foresaw that the price of gasoline would reach $7 a gallon by year’s end, the company would adjust its product mix in a heartbeat. Or if Henry Ford Hospital knew a cure for cancer was right around the corner, it would hire more personnel who could provide the appropriate treatment to patients.
Trouble is, no one has been able to peer into the future. Until now, that is.

A mobile calendar-sharing application developed in Detroit, called UpTo, allows users to share their schedules with clients, colleagues, and even potential customers. Say, for example, someone used the app to share news about a private event honoring auto dealer and race-car team owner Roger Penske. It’s a safe bet suppliers and potential vendors, once they found out, would jump at the chance to purchase a ticket.

“The way it works is that you share your calendar with select clients and friends, which then generates conversations about potential business deals, coveted events, or key networking opportunities,” says Greg Schwartz, co-founder and CEO of UpTo, available on the iPhone. It will soon be offered on Android phones and the Internet.

Developed in partnership with Chris Kaufman, Mat Piccinato, and Dave Webber, UpTo is one of a dozen companies within the portfolio of Detroit Venture Partners, a venture capital firm run out of the Madison Building in downtown Detroit. The principals, who invested $500,000 to get UpTo started, include Quicken Loans Chairman Dan Gilbert, Earvin “Magic” Johnson, ePrize Chairman Josh Linkner, and entrepreneur Brian Hermelin.

So far, the investment is paying dividends. The free app has been downloaded more than 5,000 times since its debut at the Launch Festival in San Francisco in early March. In turn, more than 25,000 events have been shared.

“What we found is that the conversations surrounding an event are generating the most traffic,” Schwartz says. “With Facebook, Twitter, and Foursquare, you learn about things after the fact, while UpTo is a harbinger of potential business deals, connections, and events.”

Such traffic patterns bode well for the company, since advertisers value social networks where users stick around, rather than move from app to app in rapid succession.

A review of traffic on UpTo is fairly revealing for its ability to generate interest. For example, one user released a code that allowed people to pre-order seats for the recent Kid Rock performance with the Detroit Symphony Orchestra. By keying in the code, users were able to select choice seats before the tickets were sold to the general public.

In another instance, someone posted information about an upcoming business trip to New York. In short order, there was an invitation to visit a potential client. Other comments have focused on the little things that can add up to a business deal, such as the location of a private booth or the best waiter at a given restaurant, what to wear for a baptism, and details about an upcoming squash tournament at the Detroit Athletic Club.

“If you pay it forward, chances are you will be rewarded,” Schwartz says. db  — R.J. King