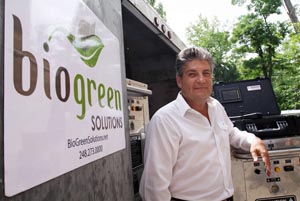 When a hotel or shopping mall owner hires a cleanup crew to eliminate odors, mold, or a bacterial outbreak, they usually sweep any mention of the incident under the rug. But hitting the mute button seemed like a good waste of a crisis, says Larry Smith, president of BioGreen Solutions in Bloomfield Township.

“Managers tend to have a reactive mindset to a cleanup effort, but I thought there was a lot of goodwill if you had a proactive program where a building was certified clean,” Smith says. In addition, BioGreen Solutions created a marketing program so building owners could tout the fact that their properties were regularly inspected (every 30 days) and cleansed using environmentally safe products.

Launched in 2008, BioGreen’s revenue increased steadily at first. But with more states —  including Michigan — instituting smoking bans of late, the company began to see a decline in its cleaning orders. To offset the loss, BioGreen bought a firm that kills bedbugs using thermal remediation (a pesticide-free program). The deal, completed in March, couldn’t have come at a better time.

While bedbugs were largely eliminated in the United States in the past half-century, the insect is making a huge comeback, largely due to a rise in international travel. In August, Detroit was on the list of the 15 most bedbug-infested cities, according to Terminix.

Described as the ultimate hitchhiker, bedbugs can be found in mattresses, clothing, and furniture. Feeding off of human and animal blood, the insect often causes red, itchy welts on the skin. In the past, pesticides were used to control bedbug infestations — but the process took days to complete and, oftentimes, furniture and clothing had to be thrown out.

With Smith’s thermal remediation system, BioGreen can rid a hotel room of bedbugs in less than four hours. And with this system, the furniture remains in place. That’s a big relief to hotel owners. Other clients include retail centers, theaters, dormitories, office buildings, and private residences.

To complement the thermal remediation system, BioGreen invested in a pair of beagles — Cooper and Addie — who can sniff out bedbugs.  With revenue ratcheting upward, Smith and his staff of 20 aim to take the company national. “We’re in 17 states largely because the hotel chains keep ordering our services,” Smith says. “Plus, everyone loves our K9 unit.”

Pull back bed sheets and check all the mattress seams and under the tag for bedbugs or tiny black spots (excrement).

Headboard
Check joints, crevices, and the back of the headboard. In addition to live bugs, be on the lookout for tiny black spots.

Look in the drawers and along the wall on the side of the bed. If you see powder in the drawers or on the headboard, it is likely that the room has been treated for bedbugs by an exterminator.

Consider keeping suitcases off the floor by placing them on a luggage stand. When you pack or leave, inspect your luggage carefully. Inspect every item as you pack.