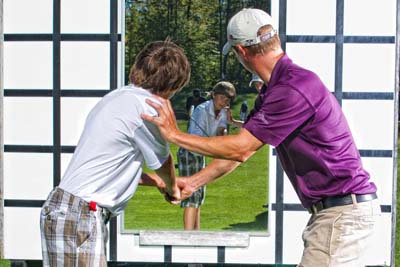 Golf instructor Bob Krause has a problem most of his peers would love to have. He’s a one-man golf conglomerate.

Six days a week he coaches players, ranging from top juniors to high handicappers trying to cure a slice. Some are celebrities such as Lloyd Carr, the retired University of Michigan football coach, or former Detroit Red Wings great, Mickey Redmond.

Last year he raised his rates hoping to ease the workload. It didn’t work. Golfers are still flocking to him, making appointments months in advance. “I have people booked every Saturday at noon for the next three months,” he says.

And if his schedule wasn’t daunting enough, he has two other projects on the front burners. He invented and patented a simple training device that coaxes players to take a club back on the proper plane in the back swing and drop it in the right slot through contact. The device will be manufactured in Michigan, and will go on sale in June. He’s also developing a mobile app that gives players 30 seconds of video instruction on particular shots such as chipping or bunker play.

Another new endeavor this season will be the Bob Krause Junior Elite Academy at Fieldstone Golf Club in Auburn Hills for players eight to 18 years old. “We’re really going after the 100 or so top tier boys and girls to give them a chance to experience an academy, learn the game, and the swing as they work towards earning a university scholarship,” Krause says.

Within minutes of meeting the friendly, chatty 41-year-old Krause, a key to his success is evident — he’s a born salesman. “What I really enjoy about him is he is very positive, he doesn’t overload you, and he breaks everything down to simple basics,” says Carr. “I hit the ball last summer better than I hit it in years, and I give him a lot of credit for that.”

Redmond is equally enthusiastic. “I thought I knew a lot about golf until I met Bob. He showed me the real connection between the hands, the take away, the setting of the club, and the release after contact,” Redmond says. “All of this has given me the knowledge I needed to correct poor shots and hit the ball consistently much straighter and farther.”

And if anyone doubts Krause’s chops as a salesman, the folks at Cadillac of Novi will vouch for him. Two years ago, Krause conducted a clinic during a golf outing. The dealership was so impressed they set him up with a loaner emblazoned with his name and the name of the dealership.

Since then, Krause has sold more than a dozen Cadillacs to students and others along the way. “I’m honest with people, and they trust me,” he says.