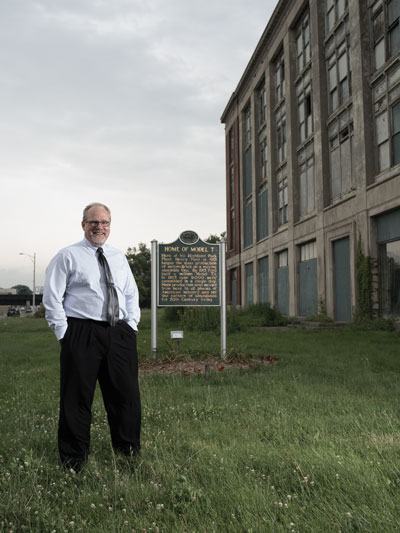 Under the list of really bad ideas comes the Soviet Union’s attempt to add radioactive waste to a poorly run uranium dump in the Czech Republic. It was in the early 1990s, and Tom Wackerman, founder and president of ASTI, an environmental and engineering services firm in Brighton, was asked to assess the project and report his findings to the town, which had been relocated downstream.

“Once the Soviets had moved the town, complete with airlifting the church, they filled in the mine and a valley where the town was with uranium waste, and installed a dam,” Wackerman says. “Well, the dam was leaking like a sieve, and they wanted to put more hazardous waste on top of it.”

Through an interpreter, Wackerman told the Soviets that any added radioactive material would turn the waste into a liquid state and make the situation far worse. When he finished giving his report, the visiting Minister of the Environment laughed at his findings and said the Soviet Union was going to proceed with its plan.

“What I had reported was that the Soviets needed to clean up the entire site, and I think the entire town agreed with me, but they were powerless,” Wackerman recalls. “It was like a scene in a 1950s-era gulag movie. Everyone was wearing the same clothes, all the young people had left, and we met in a concrete building with a single light bulb.”

A few months later, the Minister of the Environment was arrested after it was determined he was a former KGB agent who was wanted for committing war crimes, Wackerman says. “We worked with them and cleaned up the site, and I remember they paid us upfront, which was pretty unusual.”

Since that time, ASTI has worked on more than 10,000 environmental-related projects, from assessing the ecological condition of the vacant Michigan Central Depot in southwest Detroit prior to the filming of Transformers 4, to preparing for the upcoming conversion of the empty Wurlitzer Hotel in downtown Detroit into a boutique hotel, to the redevelopment of the former headquarters building at the Model T plant along Woodward Avenue in Highland Park.

The company’s clients include bankers, lawyers, commercial developers, homebuilders, manufacturers, engineers, municipalities, government agencies, nonprofit organizations, and architects, among others. “What’s changing now is urban redevelopment,” Wackerman says. “Eighty percent of our work is in rural areas, but that’s been changing. The resurgence in Detroit has created a lot of work for us.”

The firm, a certified contractor with the U.S. General Services Administration, also will assess the costs of environmental issues prior to the sale of a company or corporation. “In Detroit, you still have a lot of projects that need incentives,” he says. “But the big milestone will be when incentives are no longer needed. That means the resurgence is real and will keep on going.” db