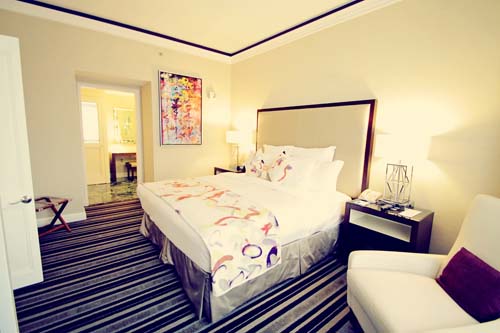 Riding the coattails of a luxury brand can do wonders for any product or movement, but what happens when the economy shifts downward? For the former Ritz Carlton Hotel in Dearborn, the prestigious nameplate became a drag on occupancy and revenue following the 2008 global financial meltdown.

“The challenge from the recession was that many executives didn’t want to list the Ritz Carlton on their expense account. They didn’t want to be perceived as out of touch with economic reality,” says Chuck Skelton, president of Hospitality Advisors Inc., a hotel consulting firm in Ann Arbor. “Ford Motor Co. also pulled back on corporate travel.”

In June 2010, in a bit of fortuitous timing, Host International sold the Ritz to Greenwood Hospitality Group. Eager to distance itself from the Ritz brand, the new owner quickly changed the name to The Henry, and launched a long-anticipated renovation of the 308-room hotel.

The multimillion-dollar upgrade, now finalized, includes a redesigned lobby and studio lounge, renovated rooms and suites, a new Club Lounge on the 10th floor for premier guests, and a new signature restaurant called TRIA, An American Brassiere. In addition, the hotel began offering contemporary paintings and sculptures for sale in a partnership with Park West Galleries in Southfield.

“It was like the clouds parted and the sun came out,” says Alan Osborne, The Henry’s director of sales and marketing. “The renovation had been talked about for years, but was never completed. Now we’re able to drive a lot of new and repeat business because we essentially have a brand-new hotel in the marketplace.”

For the first time in recent memory, occupancy is above 60 percent. The hotel is recording double-digit increases in occupancy each month over last year, while group business is projected to climb 30 percent this year. The results have meant higher average room rates, and an increase in food and beverage sales.

Meanwhile, Marriott International announced The Henry earned the Autograph Collection Hotel of the Year award for 2011, among other honors. “The challenge is maintaining our momentum,” Osborne says. “We do a lot of employee training, and we can’t take anything for granted. There’s too much competition.” db