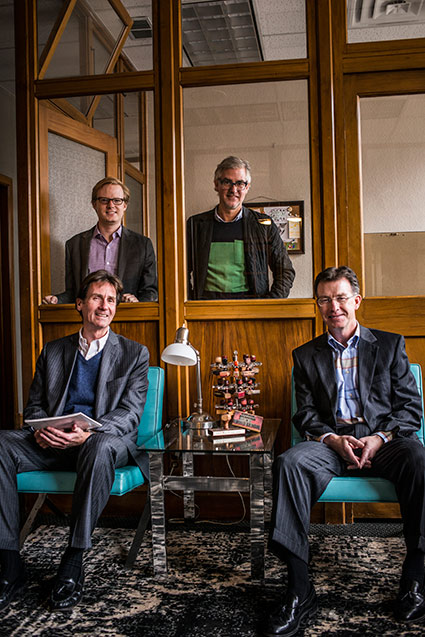 How does Brophy, a production studio in Detroit’s Midtown district, land a creative account with Christian Dior S.A., the Paris-based luxury goods company? While Detroit was once called the “Paris of the Midwest,” due to similarly planned streets, avenues, and parks as those found in the City of Lights, that wasn’t enough.
Rather, Brophy used its technological heritage — it was originally founded in 1939 as Brophy Engraving Co. — and its track record of working with iconic brands like Fiat Chrysler Automobiles, HoMedics, myCharge, Bissell, House of Marley, and others.
Offering a lesson in embracing cutting-edge technology and nurturing the next group of family members in the business, which now spans the fourth generation, Brophy grabbed onto an early knack for tinkering and never let go — even if it was sometimes difficult to convince clients to take a chance on the latest innovations in design, print, graphics, and color tones.
“When you push the boundaries of the norm, it can take a lot of assurances to get a client’s approval to move forward into the unknown, but once a new advancement proves successful, everyone takes notice,” says Drew S. Brophy Sr., a director of the firm and grandson of the company founder, Howard M. Brophy. “That’s been one of the reasons we’ve been able to draw international clients.”
To land the Dior account, the company and its 19 employees crafted an eye-popping commercial featuring lipstick cases that travel around the screen in a predetermined pattern, similar to
a series of dominos falling one after the other. The advertisement and other design work were developed by tapping into a number
of the creative production studio’s latest tools, including computer graphics, 3-D imagery, animation, and augmented reality. In addition to print ads, Brophy designs packaging, websites, apps, and
video offerings.
An early advancement helps illustrate the extent to which the company will go to push the creative industry forward. In 1991, the Brophy team developed the first clear satellite map of the earth by quilting together dozens of images.
“We worked to create a (spherical) image of the world without clouds,” says Howard M. Brophy, another director of the firm and Drew’s brother. “A lot of people think Google did it first. We used computers that were the size of washing machines, each of which could handle 300 megabytes (of data), and strung them together to get the power we needed to create the image.”
As risk-takers, the firm has scored numerous wins by pushing emerging technology into the mainstream. For example, in 1964, Brophy developed a process to etch text and halftone images together on the same copper plate, which streamlined the printing process. In 1967, they mastered color scanning so that images could be reproduced in a fraction of the time. All of the advancements have brought Brophy plenty of awards, along with a client base that today operates in 52 countries.
“That’s the current challenge, how to follow your global clients into new countries and regions,” Brophy says. “Believe me, we’re up to the task.” db