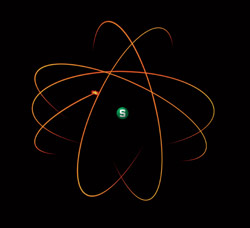 Over half a century has passed since Michigan State’s visionary leader John Hannah began transforming the pioneering land-grant agricultural college into a multidisciplinary public-research university with a world-renowned reputation for excellence.

Hannah’s groundbreaking work, which eventually established Michigan State as the country’s eighth-largest university, cemented the institution as a major player in the transformation of Michigan’s economy under the leadership of another visionary president, Lou Anna K. Simon.

It also set the stage for attracting one of the most advanced nuclear and astrophysics research facilities in the world. Following an exhaustive competition with the prestigious Argonne National Laboratory, run by the University of Chicago, last December the U.S. Department of Energy named Michigan State as the site for the $550-million Facility for Rare Isotope Beams (FRIB), a next-generation nuclear-science facility. In addition, following construction, the DOE is expected to provide up to $1 billion ($50 million annually for 20 years) or longer to advance scientific discoveries.

The facility, which is expected to be running by 2017, will build upon the success of MSU’s National Superconducting Cyclotron Laboratory, which submitted the proposal to the DOE. The buried, 300- to 400-meters-long, high-intensity accelerator will enable scientists from around the world to produce a far greater number of rare isotopes in the further study of nuclear structure and astrophysics — a science that has led to breakthroughs in medicine (including better cancer treatments), materials research, national security, and physics.

According to a study that was completed by the Anderson Economic Group during the FRIB proposal process, the project will generate $1 billion in economic activity over the initial decade, create several hundred permanent jobs, and result in state tax revenue of $187 million over a 20-year period.

“This is one of the biggest economic-development gains in Michigan in at least a decade,” says Patrick Anderson, CEO of Anderson Economic Group in East Lansing, who once served as Michigan deputy budget director under Gov. John Engler. “It’s more like the beginning of a small industry than it is the location of one plant, because the FRIB will bring a tremendous amount of dollars into mid-Michigan for at least two decades and will likely spin off new technologies and companies that will want to locate near MSU.”

The story of how MSU landed the FRIB against long odds is an example of how a university, backed by a solid plan, can succeed in securing millions of dollars for a region. Seven years ago, then MSU President Peter McPherson convened a statewide advisory committee composed of influential business and community leaders to help prepare a bid for what was then a $1-billion Rare Isotope Accelerator (RIA). However, because of federal budget constraints, by 2006 the project was shelved. It was later modified to half the cost and renamed the Facility for Rare Isotope Beams.

David Hollister, president and CEO of the Lansing-based Prima Civitas Foundation, a nonprofit collaborative dedicated to promoting entrepreneurship and business development in mid-Michigan, was co-chair of the original advisory committee. He later served on MSU’s FRIB advisory committee.

“Many people gave MSU no chance for the original RIA project because many assumed the DOE would just give it to the Argonne National Laboratory, pursuant to their procedures,” Hollister says. “The advisory committee and the Michigan delegation simply wanted to ensure that there would be a fair competition because, in the end, we knew it came down to the science.”

Finally, in May of 2008, the DOE gave MSU and Argonne two months to submit proposals for the FRIB, subject to a merit-review process conducted by a panel of world-renowned experts. In October, MSU representatives, including President Lou Anna K. Simon and Dr. Konrad Gelbke, director of MSU’s National Superconducting Cyclotron Laboratory, gave presentations in Washington, D.C., over a two-day period, followed by an onsite visit a week later by the review panel. Gelbke says that with many of their people logging long hours — and just two months to complete the proposal — “it was organized chaos.”

One advantage for Michigan State was that Gelbke and the school had the vision for an $18-million upgrade to the NSCL facility, which is expected to be fully operational by next summer.

With the new development, Gelbke says theirs will be the first lab in the world with the capability to produce isotopes “at high energy in-flight, and then stopping them and reaccelerating them with precision to lower energies, which is important to the study of the processes inside of stars.” That technology, he says, will allow a smooth transition into the FRIB.

On Dec. 11, representatives from Argonne and Michigan State were invited back to Washington for a closed-door meeting to learn the results of the competition.

Gelbke was thrilled when DOE officials told him MSU had won. “I was speechless,” he says. “It had been a very intense competition against an extremely competent group.”

With the FRIB, Gelbke now feels that Michigan State will have international prominence for years to come.
Lou Anna Simon was in a meeting when she got the call from U.S. Sen. Carl Levin. “For a moment, I was just stunned,” she says. “This is a game-changer — and if we’d lost, in 10 years we’d no longer be one of the world’s leaders in rare-isotope research.”

Simon says their proposal was so laudable because of a statewide team effort, with University of Michigan President Mary Sue Coleman even putting in a good word. “It shows that, as a state, we can pull together for these big science projects,” Simon adds, “and compete with the brands that typically receive this kind of award.”

Obtaining the FRIB in East Lansing is a significant addition to the University Research Corridor, a consortium founded in 2006 by MSU, U-M, and Wayne State University to leverage their collective capabilities and spark regional economic development through innovation, technology, and education. Combined, all three schools receive more than $1 billion a year in federal research dollars.

“The success of this consortium puts us on par with other well-known research corridors, such as those in Boston, northern California, Pennsylvania, and North Carolina,” Hollister says.

Just as the “Big Bang Theory” attempts to explain the beginning of the universe, the FRIB may provide a big bang for additional economic development in mid-Michigan, according to some experts. Greg Main, president and CEO of the Michigan Economic Development Corp., says the FRIB can do much more than solidify the state’s reputation as a center for world-class scientific research.

“As we come out of the recession, the places that will prosper the most will be those betting on new technologies and [those] who have the ability to commercialize those technologies in their own state,” he says. “By creating a pathway from the research labs into the commercial sector, you’ll certainly be better off, but the key is to have the capital and other support mechanisms for the entrepreneurial community.”

Hollister firmly believes that the economic spinoff from MSU’s state-of-the-art nuclear-science technology will be “enormous.” For example, he points to the Lansing-based high-tech research and manufacturing firm Niowave Inc., which Prima Civitas helped foster. Dr. Terry Grimm, a senior scientist at MSU’s cyclotron lab, started the company after recognizing that advancing technology would provide more applications and more business opportunities.

In 2005, Grimm left MSU to start Niowave, which specializes in superconducting particle accelerators for labs, universities, homeland security, and the medical field. The rapidly growing firm is one of only two private manufacturers in the country fabricating components made from niobium, an element that allows for superconductivity with greater efficiencies.

Grimm converted a decommissioned elementary school and began recruiting highly skilled machinists from the declining auto industry. “In a downsizing economy it was a good time to start a business,” Grimm says, “because we were able to buy machinery at a lower cost, and we had a skilled labor force available for hire.”

In four years, Niowave has grown to 45 employees and, in 2008, it posted annual revenue of more than $5 million. Grimm projects revenue will double each year for the foreseeable future because of the rising demand for superconducting accelerators. In June, the company signed a contract to produce 10 superconducting radio frequency cavities for MSU’s cyclotron and now has a rapidly growing list of customers both at home and abroad, including the U.S. Department of Defense. “Our pitch to the area is that Michigan has a chance, with the high-tech manufacturing from the auto industry, to really corner the market with these technologies and the expertise at the MSU lab,” Grimm says.

Helping with that pitch will be several mid-Michigan regional partners who will collaborate in a strategic marketing effort surrounding the development of the FRIB. The cities of Lansing and East Lansing, the Lansing Regional Chamber of Commerce, the Lansing Economic Area Partnership, and the Prima Civitas Foundation will not only be promoting the rich community assets in the region vital to attracting scientists and innovators from around the world, but they’ll also be laying the groundwork for identifying businesses that could benefit from relocating to be near MSU’s nuclear-science facility.

“We have an unbelievable asset that’s been handed to us and, as a region, we need to implement strategies to capitalize on it,” says Lansing Regional Chamber of Commerce President Tim Daman. “Over the next couple of years, we’ll be exploring spinoff opportunities and looking at other examples outside of Michigan where these types of labs have generated significant economic growth around them.”

As the man responsible for directing MSU’s nuclear-science program and the implementation of the FRIB, Gelbke is especially enthused about the scientific questions that may be answered — and what the new discoveries could mean for mankind.

“The FRIB will create a new knowledge base and hopefully [will help] us understand how the elements were made in the universe, where we came from, and where we will go,” he predicts. “The economic benefits are important, but what’s underplayed are the dynamics of creating a center where great minds come together and create important spinoff applications.”