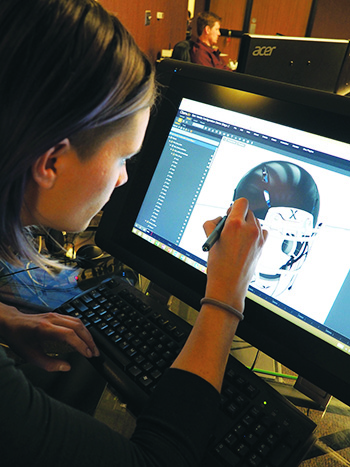 When Brad Wardell was an electrical engineering major at Western Michigan University in Kalamazoo, he paid his way through school by developing a video game called Galactic Civilizations. From there, he started Stardock Corp. in Plymouth with a personal mandate to break new ground in the $111-billion computer and video game industry.

The trouble is, with only a handful of game developers in the state, Michigan hasn’t exactly been on the map for attracting talent. Unlike states such as California, Texas, or Maryland, Michigan isn’t “super competitive” when it comes to backing loans against intellectual capital — the lifeblood of software developers.

“I can’t realistically borrow money,” Wardell says. “In another state, I could borrow money and use my intellectual property as an asset. In Michigan, you can’t really do that because the (banks) don’t understand it.”

For Wardell, growing his company from a one-man shop to 100 employees hasn’t been easy. “When you borrow money, whether you’re borrowing for a house or a car, the bank wants collateral,” Wardell says. “With software, I have no accounts receivables. I don’t have a physical good. (Lenders) don’t know how to deal with software companies because they don’t know what they’d take if you don’t pay the loan. In other states, (lenders) would have rights to the software.”

While Michigan offered film and video game development incentives from 2008 to 2012, Stardock never benefited from the program that has now ended.

“We looked at the film incentives. They were kind of neat, but it was too much paperwork,” Wardell says. “Compliance with it would have cost us more than the amount of money we could have gotten for it. Even though we make tens of millions of dollars a year, (to area lenders) it means nothing. There is nothing to have a lien on.”

Sean Hurwitz, CEO of Pixo Group in Southfield, says the incentives were helpful. Launched in 2009, Pixo Group has developed numerous games — mainly on mobile and tablet devices — and is known as an innovator in the use of virtual reality.

“The incentives got things going a little bit when (they were) here,” he says. “Developers were looking at an angle. What you find is because of the rise of mobile, there’s nontraditional gaming companies developing apps. But it’s not a very strong industry here.

“From 2012 through today, we’ve been developing games and apps for big brands like the U.S. Navy and OnStar, (and) we do a lot of virtual reality,” Hurwitz says. “It’s a way for the brands to engage with their audience in a very game-like way.”

Both Stardock and Pixo officials say the video gaming industry in Michigan would be more robust if lenders extended capital so companies could grow. “If the banks were actively lending in our industry, we would be so much further ahead,” Wardell says.