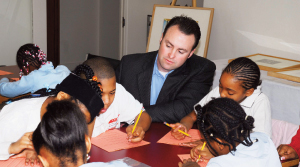 Giving money to a worthy cause is an age-old tradition, but the contribution of time, especially in today’s fast-paced business world, is a rare commodity. So how has Beyond Basics, a nonprofit educational group in Bloomfield Hills, lured top executives to teach students in the Detroit Public School system?

Tapping 1,000 volunteers and employing a handful of part-time and full-time staff members, Beyond Basics has achieved its successes through not only sheer will and determination, but also through sound organization and resourcefulness.

Aside from its outstanding reading and writing programs, the organization offers a variety of auxiliary activities, which delve more deeply into art, culture, and mentoring. It also operates a publishing company that produces hardbound copies of stories that students draft in the classrooms (one of which fetched $3,000 at a recent fundraiser).

“You almost have to witness the impact,” says Beyond Basics executive director Pamela Good. “The perception is that you can’t change the children in one meeting. I would argue that you absolutely can.”

Corporate sponsorships like Citigroup, Big Boy Restaurants, Daimler Financial Services, and TrackSpeed are the lifeblood of the organization. Founded in 1999, Beyond Basics operates in five public schools — four in Detroit, one in Pontiac — serving close to 5,000 elementary students at any given time. More schools will be sponsored in the fall.

“You don’t have to be a rocket scientist, [and] you don’t need to have a million dollars,” says James Ryan, communications director for Daimler Financial Services in Farmington Hills, the corporate sponsor for Detroit’s Thirkell Elementary. “You just need to donate a couple hours of your time [per week]. It has an indelible effect.”

And witnessing that effect firsthand is what keeps them coming back. “In any charity, you need donors and benefactors,” says Tom Proctor, Beyond Basics’ co-chairman and founder of The Designate in Birmingham, a company that provides transportation services for the alcoholically impaired. “Ours is a very powerful pitch: Your dollars aren’t getting dumped into some general fund. Your dollars are going to those kids you sponsor.”