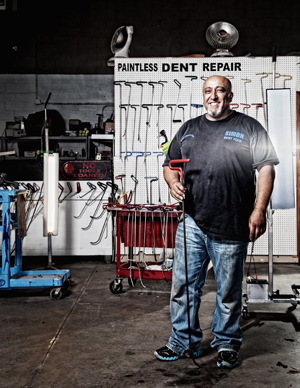 A back wall and workbench are covered with the tools of Simon Daoud’s trade: odd-shaped rods with colorful handles that he uses to slip up under fenders, inside doors, and underneath panels. Other tools are used to poke, prod, and coax out dents from cars and trucks. No use for Bondo here.

Some of the tools, says Daoud, are of his own designs. Other equipment has been fashioned from several repair techniques manufacturers incorporate on assembly lines. “If I could do this without money, I would do it for nothing just to see the satisfaction on customers’ faces,” says Daoud, owner of Dent Genies Inc. in Livonia (29429 Six Mile Rd, SW corner of Six Mile and Middle Belt behind Glory Hair Salon). “I see people come in with estimates for $600 or more from a body shop, and they leave here happy for $200. Beautiful.”

Daoud is one of the area’s leading practitioners of “dent-less” repairs, an art he has perfected for more than 27 years.

The key to coaxing dents back into shape, sans hammers or other standard tools, is to allow the damaged metal to take the lead, Daoud says. “Metal develops a memory and it knows where to go back to; I just help it get there,” he says. “I have dreams where I wake up sweating, pushing out dents.”

Daoud began his career in his native Saudi Arabia after someone damaged his first car. “It was a ’77 Oldsmobile, a two-tone, and I didn’t want to have it painted. My father owned a woodworking shop, and I made this tool out of wood and pushed it up under the metal. I made a mess of it, of course, but learned from it,” he laughs.

After moving to the United States in 1984, Daoud was returning a rental car after a rainstorm and saw workers struggling to fix cars damaged by hail. “I told them to let me try. I worked there three weeks and they handed me a check for $3,000. That’s when I knew I could make a living doing this,” he says.

Now customers seek him out. “I had a guy drive here from Pennsylvania. He had a 1967 Dukes of Hazard Dodge Charger with a dent from a hoist, about six inches long, on the roof,” Daoud says.

“He gave me $300 to just try and see what I could do. I made a special tool, sharp as a needle, and started poking at it. He was pacing around like a father with a new baby and I told him to just sit outside for a while. When I called him in, he was the happiest guy in the world. He would have paid me twice as much, but I just charged him the $300.” db