As co-founder and CEO of re:3D, a company that pioneered and developed a 3-D printer it calls the Gigabot, Samantha Snabes boldly describes the machine as “the world’s first affordable, human-scale” 3-D printer, capable of producing oversized components for everything from generators to automotive parts.

“We go as big as your budget,” Snabes affirms. “We start at the size of a toilet and could go up to 6 feet tall in our standard offering, but we can (also) do custom machines.”

Snabes is clearly someone who thinks big in every way, and it started when she was growing up in Westland. “I always wanted to be an astronaut, since I was like 2 or 3,” she says matter-of-factly. “I did a lot of camps and seminars and clinics around that, and I went to space camp a couple of times.”

After her visit to space camp in the fourth grade, Snabes decided to get proactive. “I’d gotten a book that listed where all of the astronauts were from in Michigan and where they went to school,” she says. “When I got back from space camp, I just sort of started cold-calling astronauts and asking how I could become one.”

Snabes passes on this tidbit with a nonchalance that suggests the notion of a fourth-grader settling down with the white pages and confidently cold-calling complete strangers — never mind astronauts — isn’t at all a big deal. Especially because she got the answers she was looking for.

“They told me I had to go to college and get research experience,” she says. “There was also a young astronaut’s club my mom would drive me to once a week after school, and I got to know the guy in charge of that program. He thought my ambition was really cute, and he would always introduce me to the astronauts who came to (the club). There were a couple that I shamelessly solicited.”

Snabes laughs here. After all, she was still a student at Walker-Winter Elementary School in Canton Township, yet she relentlessly quizzed every astronaut who crossed her path. And she was already multitasking, well into her fledgling career as an entrepreneur — offering a service that can only be described as unique, if not downright odd.

“I would have kids give me their lunch money and I pulled their teeth out for them,” Snabes blithely reports. “They were close to falling out, anyway, and if they got their tooth, they could get money from the Tooth Fairy. I had different techniques. Mostly I used a paper towel and had to figure out how many times to fold it, so it would keep dry, not be too thick, and give me enough of a grip.”

After graduating from Wayne Memorial High School, Snabes enrolled at the University of Michigan-Dearborn, where she embarked on a grueling academic schedule pursuing undergraduate degrees — a B.S. in biology and a B.A. in international relations and Hispanic studies, with a minor in psychology. From there, she entered graduate school, earning an MBA in supply chain management and international relations.

That’s when her focus turned from a desire to become an astronaut to a fascination with biosciences. While Snabes was still an undergrad, she worked as a research assistant at Aastrom Biosciences, a biopharmaceutical company located in Ann Arbor.  She continued to work there after graduation.

“They hired me as a tech to work on a DARPA grant there,” she says. “I didn’t even know what DARPA was.”

DARPA, or the Defense Advanced Research Projects Agency, is a research and development arm of the Department of Defense that’s focused on developing emerging technologies for use by the military. Snabes’ job was to continue work that had already begun on an artificial immune system, using human stem cells grown from adult bone-marrow samples.

“I had my own lab, and I worked on a device for what was basically a way of growing bone marrow and keeping the cells going for longer and better than you could with traditional technology,” she says. “I felt like it was a success. Our big claim was that we were able to keep the naturally occurring stem cells going for a year, which was impressive at the time.”

Indeed. The efforts of Snabes and her boss on the project resulted in an exclusive worldwide license from Aastrom. In 2006, the pair founded a company they called BioFlow Tech to market their product. Three years later, in the process of selling the company, Snabes heard about an opportunity at the Johnson Space Center in Houston.

“They were starting up a number of innovation endeavors in their Space Life Sciences program, and because the average employee age was so old, they were really hoping to get a young person that had startup experience and a light science background,” she recalls. “So it was a short list, and they invited me to come down and work for them. I was just really lucky.”

The job at NASA afforded Snabes the ultimate convergence of her twin passions: space and bioscience. Even better, much of her work focused on how the conditions of outer space impact astronauts, while also anticipating how to diminish or even prevent those risks in future flights.

“I worked on a number of innovation initiatives,” she says. “Basically, I was what they called an intrapreneur. So instead of being an entrepreneur, it was all about citizen engagement, working on all sorts of different efforts to form nontraditional partnerships with groups outside of the agency to solve problems and help the agency be more efficient.”

During her time at NASA, Snabes also did volunteer work with Engineers Without Borders USA, traveling around the world and working on various projects. The volunteers all shared the same goal — helping people in disadvantaged areas achieve better lives by finding solutions for their infrastructure needs.

To understand the challenges, one day in 2011 she and her co-worker, Matthew Fiedler, were touring Mugonero Hospital in Rwanda. “There was a lot of expensive medical equipment sitting in the sun that had been left behind by well-intentioned groups,” Snabes says, “but it was the wrong voltage, and it was such a shame that it couldn’t be used.”

Snabes and Fiedler — a native of Iowa, with a background in farming — began brainstorming almost immediately. 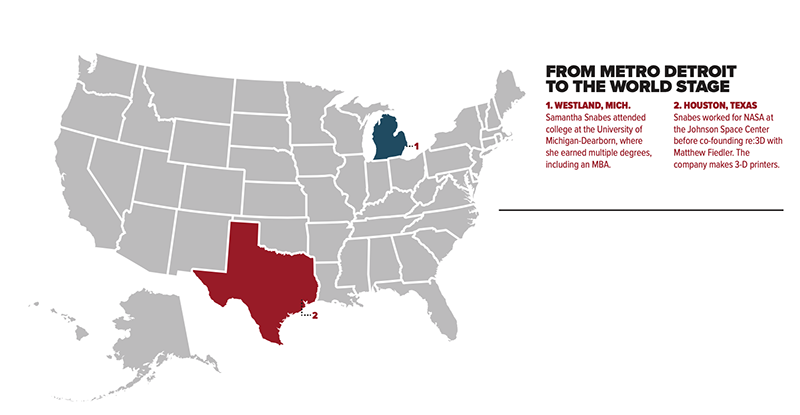 “We were thinking, What would it look like if these people could have access to more tools?” Snabes says. “They could problem-solve independently. Almost everyone we met was really motivated and wanted to solve their own problems without the dependence of foreign aid and outside support. Matthew had one of the very first open-source 3-D printers and he was really excited about it, and he showed me how to print. We started to propose this idea to make a large-scale 3-D printer for under $10,000 that could print a compost toilet.”

That’s when Snabes and Fiedler became beneficiaries of some serendipity: They heard about Start-Up Chile, a seed accelerator created by the Chilean government that supports companies with the potential to positively impact the ecosystem in Latin America. It seemed to be the perfect platform for the pair to pursue their idea. Turns out they were right. “Start-Up Chile gave us $40,000 to try and make the prototype, start a business around it, and bring the product to life,” Snabes says.

From there, the pair quit their jobs and launched a joint venture they called re:3D, but it needed additional financing. Snabes moved to Chile and began pulling together a campaign to raise another $40,000 on Kickstarter; Fiedler returned to his home in Houston and started building the first iteration of the Gigabot.

As they toiled away, serendipity emerged yet again. South by Southwest, based in Austin, Texas, and one of the world’s most prestigious conferences focused on emerging technology, invited the duo to debut their creation on opening day — just eight weeks away.

“So, while Matthew was building the printer,” Snabes says drolly, “I was in Chile timing the debut with the launch of the Kickstarter campaign.”

Their timing, under what was extreme deadline pressure, couldn’t have been more exquisite. “The media were the first people that came to the display,” Snabes says, “and there was already a lot of hype around 3-D printing at the time.”

The result was astounding: The Kickstarter initiative was fully funded in a mere 27 hours, eventually raising more than $250,000. Literally overnight, re:3D was suddenly a major player, with orders for the Gigabot pouring in from eager customers in 23 countries. Ironically, the Mugonero Hospital — ground zero for the inspiration behind the Gigabot — wasn’t among them. Snabes took that as a wholly positive sign.

“We realize then that the demand for this was in many more markets and geographies than we’d anticipated,” she says. “What we learned is that people all over the world are problem-solvers, and it was really humbling.”

Snabes hasn’t forgotten the significance of those early days in Rwanda, when the idea that became re:3D was hatched. For every 100 Gigabot units the company now delivers to customers in more than 50 countries around the world, a donation of one 3-D printer goes to someone trying to make a difference in their community.

“There’s a lot of plastic waste in those communities,” Snabes says, “but there’s a lot of waste everywhere, and I’d say the potential biggest opportunity for us is printing from manufacturing waste.”

Which is why Snabes was recently in her hometown to call on one particular customer. “They just make one component that goes into one vehicle for the Big 3,” she says. “When they receive the raw material for that one component, they have to take a cap off immediately and throw it away. Two to three thousand of them, every single day of the year.”

Snabes’ excitement is palpable as she seems to ponder the possibilities. And then she briskly pivots into a description of a project already underway in Austin. “Most of the identification cards in the world are made by a company called HID Global,” Snabes says. “We got access to some of their waste that goes to landfills, and we were able to grind it up and reprint it as planters that are now selling for $75 and $100. I don’t know if anyone else has done that, so it’s a big milestone and we’ll definitely be working on messaging around that.”

The headquarters for re:3d is located in southeast Houston, near Nassau Bay, and the 41-year-old Snabes splits her time between the home office as well as Austin and Puerto Rico, where the company has two other locations. In addition to the demanding responsibilities of her day job, over the years Snabes somehow managed to earn certification as an EMT and volunteer firefighter, and is still an active member of the Mississippi Air National Guard.

As for that lifelong dream to become an astronaut? “I apply whenever there’s a draw, every couple of years,” she says assuredly. “I don’t know when the next one will be, but I’ll apply.”

And then she adds with a wry chuckle; “I mean, you miss 100 percent of the shots you don’t take, right?”