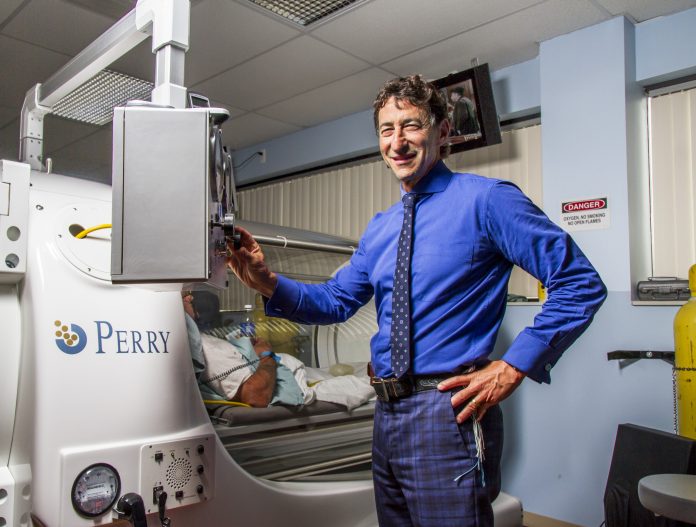 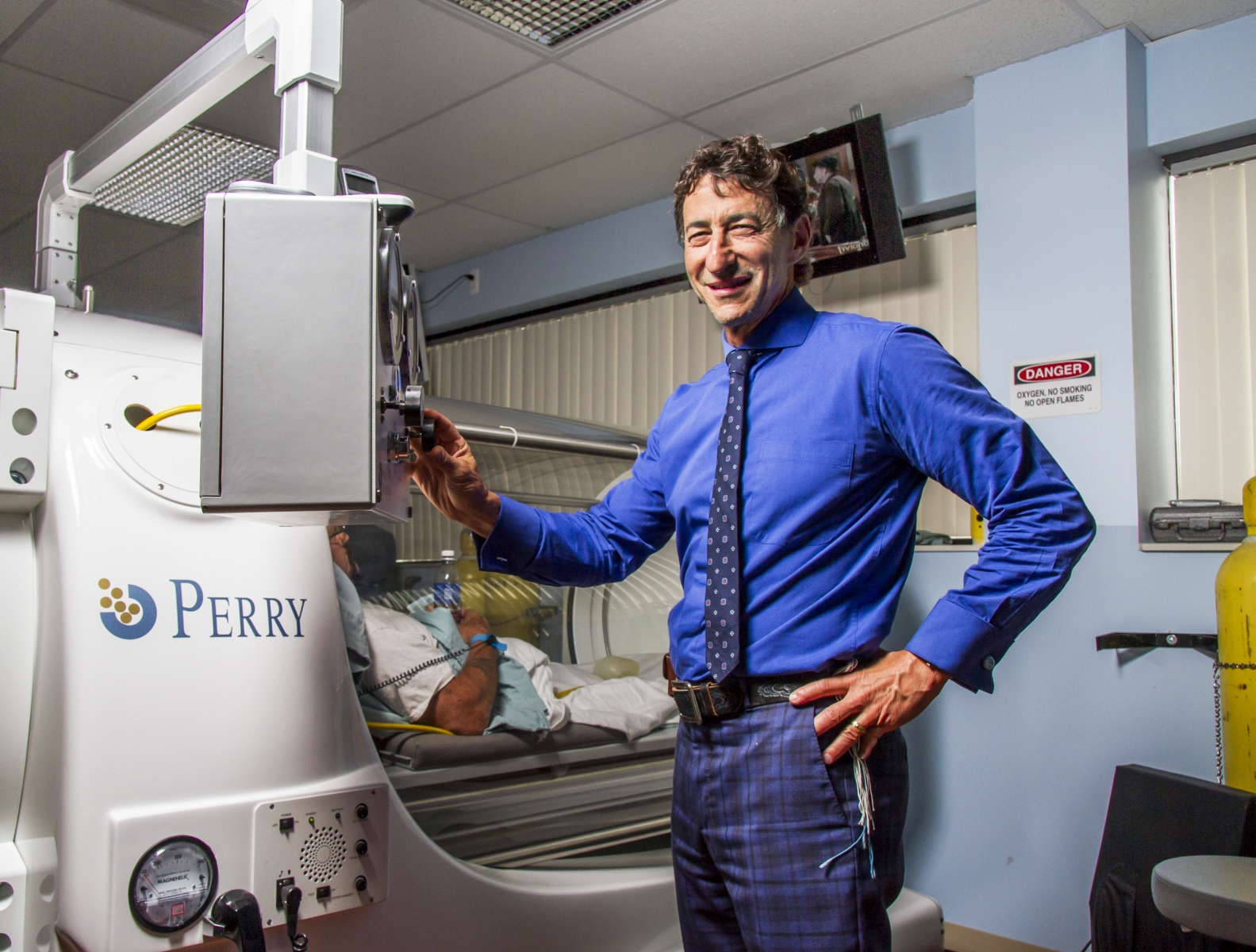 In certain cases, the use of oxygen for medicinal purposes is becoming a viable alternative to pharmaceuticals or invasive procedures. Nowhere is the phenomenon more on display than during Hyperbaric Oxygen Therapy, an American Medical Association-approved treatment that saturates both blood and damaged tissues with pure oxygen.

Used to treat an array of ailments and in-juries — acute infections, radiation burns, severe anemia, hypertension, and fibromyalgia — the therapy works by manipulating atmospheric pressure to provide pure oxygen to damaged areas of the body where healing has all but stopped. No matter the need, healing without adequate oxygen simply isn’t possible, says Dr. Bruce Ruben, medical director of Encompass Healthcare and Wound Medicine in West Bloomfield, who has been using the procedure for nearly 10 years.
Board-certified in undersea and hyperbaric medicine, Ruben says oxygen’s multifaceted role in healing is paramount in combating an array of symptoms and conditions. “Oxygen is the cornerstone of metabolism,” Ruben says. “It also has multiple specific roles in driving the protein physiology involved in healing. When oxygen is absent, healing stalls.”

The procedure, Ruben says, works by raising the atmospheric pressure and boosting the percentage of oxygen capable of being breathed in at a given point in time. Under normal breathing patterns, individuals take in 21 percent oxygen; the rest is nitrogen. By design, Hyperbaric Oxygen Therapy raises the amount of oxygen that an individual breathes nearly fivefold.

When the therapy is administered, patients are positioned inside of chambers calibrated two to three times higher than normal atmospheric pressure. “It’s only when the pressure on the breathable, 100-percent oxygen is increased through diving underwater or in a hyperbaric oxygen chamber that oxygen can supersaturate the fluid surrounding the red blood cells and add oxygen to those areas not getting blood,” Ruben says.

Once a patient is in a chamber, licensed technicians release a steady flow of pure oxygen via masks, clear plastic hoods, or tracheal tubes. The increased oxygen levels in the blood — 12 times to 15 times higher than normal — allow vital white blood cells and new blood vessels that aid in the healing of infections and complicated wounds to expand. Treatment periods can last as long as a few days or up to six months.

Essentially painless, aside from some potential ear-popping comparable to what one might experience on a descending airplane, Hyperbaric Oxygen Therapy (HBOT) patients can lie down, sit upright, listen to music, watch movies, or simply drift off to sleep during individual therapy sessions that can last up to two hours. Costs range from $200 to $350 for a 1 1/2-hour to 2-hour session. Most insurance plans will consider coverage if the treatment is approved by the FDA for hyperbaric use.

Ruben admits more scientific studies are needed to understand the full potential of the procedure, particularly regarding injuries and symptoms affecting the brain. “I think we’ll see more formal studies conducted and published on the efficacy of using HBOT in neurology, immunology, toxicity, surgery, and, of course, wound care,” Ruben says. “It’s imaginable that (HBOT) could eventually be used to heal the brain by reactivating brain cells and helping to create new blood vessel growth.” db