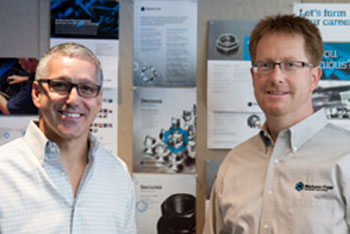 MacLean-Fogg, a supplier of precision parts to the automotive, aerospace, agricultural, and energy sectors, had an unusual problem: it was marketing locally instead of nationally and internationally. Founded in 1925, the $800-million company has 4,500 workers in 40 manufacturing facilities around the world, including 30 in North America.

“We have a collection of family-owned businesses that have been acquired over the years and, for the most part, we weren’t leveraging our entire scope of products and capabilities,” says James T. Tanner, vice president of business development for MacLean-Fogg in Rochester Hills. “We had all of these different brands, different signs, and different logos, and nothing was coordinated.”

If the company found it difficult to navigate its operations, Tanner says its clients were in worse shape. “We could have changed our name, but there had to be a rhyme and reason to it,” Tanner says. “Why do we exist? What do we do? Where are we going? We had all of these questions emerge. Whatever we did, it had to be better.”

Enter Gyro Creative, a brand agency in downtown Detroit which researched and organized MacLean-Fogg’s various operations into an expansive flow chart. The data, made up of index cards, photos, graphics, and collateral material, was arranged and posted on the walls of the Immersion Tank, a small collaborative workspace where brands spring to life or get a serious makeover.

“If you have a large company with a lot of individual parts operating autonomously, the tank is the place for you,” says Matthew DiDio, a principal of Gyro Creative. “When you go into the tank, you have to commit to a five-step plan. We start with where a company stands in the marketplace, we strategize and finalize a plan of action for where they want to be, and then we design a visual language that supports the brand. Following that, we build the brand campaign and launch it.”

Tanner says MacLean-Fogg, which has more than 80 different trademarks, is much more nimble and efficient since launching its new campaign in mid-2012. The effort included a new logo, signage, and collateral material, as well as an employee education component. “Since we’re largely B2B, it was important that all of our clients and employees understood the depth and reach of our operations,” Tanner says. “It’s like we found this new source of energy that is helping us expand at a faster pace.”

Since its founding in 1999, Gyro Creative has created or enhanced B2B brands like Magna International, the large automotive supplier. It also works in the B2C space. Six years ago, Gyro oversaw the launch of Clek, which today is one of the top safety-rated child seats in the world.

“The trend we’re seeing is B2B firms are becoming a lot more active in the branding space,” DiDio says. “If you’re better organized, you’re going to grow faster than the other guy.” db