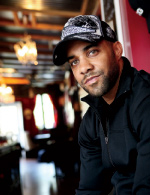 Now comes What Crêpe, a French-inspired café in downtown Royal Oak. “It’s a cool niche, and while we have 50 selections on the menu, you won’t find me in the kitchen,” says Jenkins, senior vice president of Detroit-based MiG Construction. “For me, I just wanted to open up a restaurant.”

As a fifth-generation builder — his grandfather was a celebrated civil engineer who graduated from the University of Michigan in 1937 as the college of engineering’s lone African-American  — Jenkins is no stranger to progress. To be sure, he was one of the first to apply for a $20,000 bistro license after the Royal Oak City Council passed legislation last summer allowing for beer and wine sales in restaurants of a certain size.

“Wines really pair well with crêpes,” Jenkins says, “so for me it was a natural choice. Birmingham has started offering bistro licenses, and it’s been very positive. I think it will help Royal Oak, as well. Anyone with a bistro license can’t be open past midnight, so we won’t be creating a lot of competition for the bars.”

With the $293-million MotorCity Casino complete, Jenkins and his father, Paul Jenkins Sr., have taken on more work on the Las Vegas strip. The pair opened an office in Las Vegas in 2005 and have worked on numerous construction projects, including Mandalay Bay, the MGM Grand, New York New York, City Center, and Treasure Island.

“Construction is still my main business,” Jenkins says, “but operating the restaurants is a lot of fun. I may do two or three more. It all depends on whether I can find the right concept at the right location.”