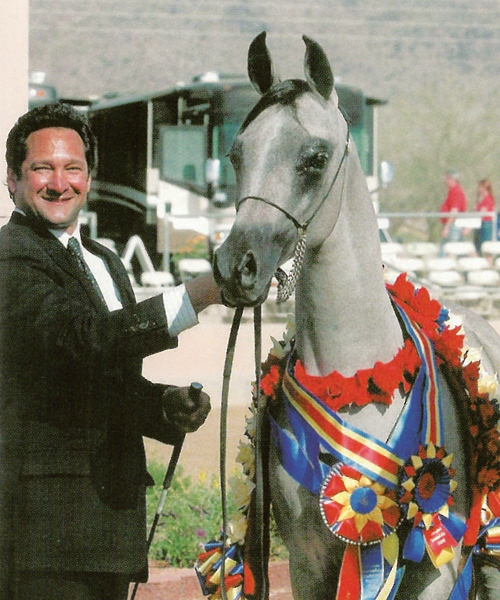 When a skilled auctioneer recently enticed bids for an Arabian filly born last June, the interested parties included a determined American buyer who was competing against sheiks, princes, and members of royal families. In the end, the winning bid for Om El Erodite was placed by the American, a female investor from Florida, and it topped $1.5 million.

The sale was the highlight of the inaugural Marquise Invitational Auction 2017, held on Feb. 24 in Scottsdale, Ariz. The average price of the 13 lots (horses) up for bid in front of an invitation-only audience of 1,000 guests was $242,800. Like fine art or antiquities, the global market for Arabian horses is driven by human emotions for beauty, romance, and pride.

While a reasonable assumption would surmise the auction was hosted by a crown prince from the Middle East or a wealthy European investor, the elaborate event — held in partnership with Barrett-Jackson Auction — was the inspiration of three metro Detroit business leaders: Jeff Sloan, founder and CEO of Aria Ventures in Birmingham; Norm Pappas, principal of Pappas Financial in West Bloomfield Township; and Jamie Jacob, CEO of Ajax Paving Industries Inc. in Troy.

“We treat the breeding and raising of Arabian horses as a business, not a hobby,” says Sloan, who embraced the equestrian world after watching the 1979 film The Black Stallion.

“It used to be that horses were used for transportation, then they became recreational when you consider racing and riding, and then there (are) the Arabian horses, who can race but are more treasured for their ancestral lineage, beauty, and personality.”

Sloan, who with his family owns and operates a horse farm in Oxford, is considered one of the world’s foremost experts when it comes to Arabian horses. One of the oldest breeds in the world, with an archived history that dates back 4,500 years in the Middle East, Arabian horses are noted for their good-natured, ready-to-please personality as well as their athletic versatility.

“Being part of the Arabian horse industry brings with it pride and a lifestyle away from the business world,” says Sloan, president of Arabian Horse World magazine. “It also opens doors to sheiks, princes, and members of royal families. And from those connections, we look to improve our business operations in metro Detroit and the nation.”