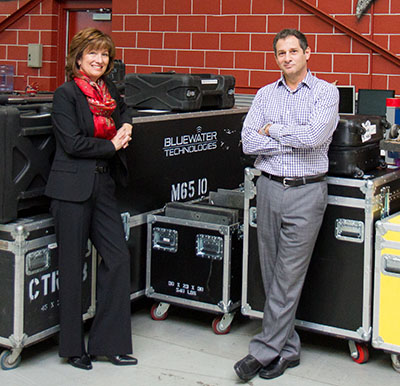 From the kitchen table to the garage, to making the Inc. 5000 list of the nation’s fastest-growing private firms, Bluewater Technologies Inc. in Southfield knows all about perseverance. “We started schlepping overhead projectors to area hotels (in 1985) and grew things from there,” says Tom Battaglia, the company’s CEO.

With a collection of several entities that were consolidated under the Bluewater brand, the firm was a front-runner in touch-screen kiosks before evolving into creating and operating multimedia presentations for General Motors, Chrysler, Kellogg’s, and Nike, to name a few. Among nearly 70 different auto shows Bluewater oversees for GM in the United States, Canada, and Mexico, Battaglia says the 2013 North American International Auto Show at Detroit’s Cobo Center is one of the more challenging.

“For Cadillac, Chevrolet, Buick, and GMC, we handle the audio and visual components, the interactive devices, and we monitor all the Web traffic remotely from our network operating center (in Southfield),” Battaglia says. “We also operate (a virtual) help desk. Where before companies might have done that work internally, today it is often outsourced, due to costs and increased complexity.”

The company also offers what it calls “systems integration” services. For example, Bluewater helped Comcast set up and now operate interactive displays as part of the cable firm’s sponsorships at Ford Field and The Palace of Auburn Hills. Around the country, Bluewater generates new customer leads at mobile marketing tours, concerts, and within retail outlets for brands such as Ford, T-Mobile, AT&T, and Blink-182, a rock band.

In addition, Bluewater worked with Nike to develop a Facebook application where participants in a recent women’s marathon in San Francisco could virtually update their relative positions to all of their friends via RFID tags embedded in the numbered bibs they wore.

Bluewater also worked with The Henry Ford in Dearborn to upgrade a 100-seat theater inside the Henry Ford Museum. The project was part of a major renovation of the museum’s collection, called “Driving America,” which was rolled out in early 2012. “It tells the story of Henry Ford in high definition, which added quite a bit to the overall experience,” says Sue Schoeneberger, Bluewater’s president. Her husband, Tom Schoeneberger, is a principal of the company, while Battaglia is her brother-in-law.

“We had multiple facilities all over town, and it seemed we were always in our cars going from one place to the next,” Battaglia says. “We built our headquarters and workspace in Southfield. We have other facilities in Grand Rapids and near Traverse City, and we recently opened an office in Indianapolis. That’s made us much more nimble and efficient.” db