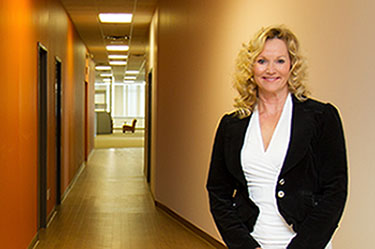 Cultural differences, security concerns, and language barriers haven’t slowed Lori Blaker’s efforts to expand her business solutions firm overseas. Headquartered in Rochester Hills, Blaker says opening offices and training centers in the Middle East and Africa offered their own set of challenges. But she says it was especially difficult to gain a foothold in Japan.

During Blaker’s first trip to Japan in 2000, a corporate assistant told her the room full of male executives she had just presented to had previously taken bets on what she would look like. Popular opinion had Blaker pegged as an older white woman who was short and overweight. The slim, 50-something Blaker defied expectations. “I never did find out who won that bet,” says Blaker, president and CEO of TTi Global.

Founded in 1976 as a home-based technical services firm by her parents, John and Shirley Brzezinski, TTi quickly evolved into an outsourcing and training firm. After Blaker was named president in 1991, she admits her rapid ascent got the best of her. “I was a cocky kid in my early 30s and I thought I knew everything,” she recalls.

But she says she matured quickly after her father passed away a year later. Mindful that she didn’t have all the skillsets to run a company that today employs 2,000 workers (350 in Michigan), Blaker says she surrounded herself with a strong management team.

Despite the fact that her father was never interested in international prospects, Blaker saw it as a business growth opportunity. TTi followed Ford into China in 1994, and provided fleet training services. “At the time, Europe was too mature a market for us to compete with,” she says. “It’s not the same case now.”

TTi currently operates 22 offices in North America, South America, Europe, Asia, Africa, and the Middle East. Most recently, Blaker visited Afghanistan as part of the first trade mission by the United States. Sensing a good business opportunity, she set up a representative office and is currently hiring some 20 training instructors.

Blaker initially got involved in Afghanistan because of the Peace Through Business program, part of the Institute for Economic Empowerment of Women, a nonprofit educational and business advocacy organization based in Oklahoma City. The program — operating in Afghanistan and Rwanda — provides business training classes for women. The top students from each class get the opportunity to visit Washington, D.C., for a week, where a female business owner mentors them. Two years ago, Blaker got the opportunity to mentor Maneja Wafik, an Afghani woman who brought the country’s issues to Blaker’s attention.

By and large, Blaker says Afghanistan offers countless training opportunities. The main airport in Kabul, for example, is run by the U.S. military because there aren’t enough trained Afghanis to work there. “Forty percent of the population is under 25, and there is high unemployment,” she says. “City busses are sitting in yards because no one can fix them. They just buy new ones,” she explains. “If the country is going to make it, we need to train the population or the country will regress to its old ways.” db