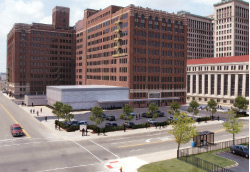 Before General Motors Corp. developed its famed technical center in Warren, akin to an industrial Versailles, the automaker created the world’s first concept car, automatic transmission, and hundreds of other advances at its Argonaut Building in Detroit’s New Center. While the massive, Albert Kahn-designed structure, complete with a design lab for famed GM designer Harley Earl, was eventually decommissioned in 1999, it’s now being transformed into a second Detroit campus for the College for Creative Studies, one of the top automotive design schools in the world.

Among the many highlights of the $145-million restoration is a partnership with the University of Michigan’s Stephen M. Ross School of Business — both institutions are at the forefront of an emerging trend to provide practical business skills to a cross-section of educational disciplines. “The idea is to give our students business-administration tools they can utilize throughout their careers,” says Tim Hudson, CCS’s director of institutional advancement.

Initially, he adds, U-M business classes will complement CCS’s master of fine arts degree programs in design and transportation design, and then expand from there.

During a recent tour of the 11-story, 760,000-square-foot complex, which was designed in two phases from 1926 to 1938, Hudson showed off Earl’s barrel-vaulted design lab, which is being converted into a 500-person conference center. The lab’s original vehicle turnstile and 20-ton freight elevator will be restored, as well. The center will be open to other conferences, and includes several breakout rooms.

Scheduled for completion in September, the Argonaut will initially accommodate 650 students and offer 150, two-student dorm rooms, along with complementary features like studios, fitness rooms, and game rooms. In addition, the campus will house all of CCS’s undergraduate design departments, a color and materials library, continuing-education classes, community arts programs, public galleries, an 80,000-square-foot commercial office center, and an art-enriched middle and high school operated by Henry Ford Academy (up to 880 students).

The development of the graduate degree programs, more than three years in the making, will include a design research center, where students will work with corporations to undertake R&D, help create consumer products, or develop new digital strategies. “From the advisory groups we created for the graduate programs, one big message from the corporations was that the new designers should have the skills to develop business strategies,” says CCS president Rick Rogers. “It isn’t enough to develop new products these days. You need strong business skills, as well.”

Meanwhile, CCS will expand its remaining disciplines at its main campus. Once the Argonaut opens, added room will be provided for fine arts, illustration, entertainment arts, photography, and other programs. The Art Centre Building, where 300 students reside, will also be renovated.