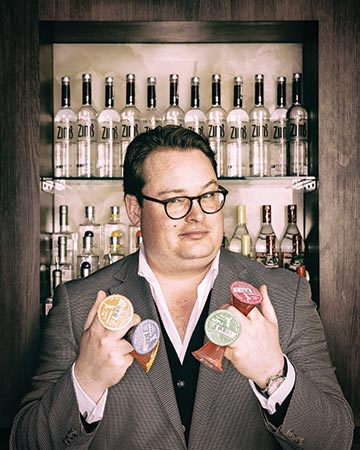 Most everyone has tried a gelatin shot, better known as a Jell-O shot. The spiked favor, which is created by adding water and vodka or another spirit to gelatin and then pouring it into plastic containers, is a popular offering at parties, tailgates, and around the pool.

While the vast majority of gelatin shots are made at home, the results aren’t uniform. Some people use cheap vodka, and often there’s much more alcohol than water, or vice-versa. So why hasn’t anyone figured out how to mass-produce gelatin shots and sell them over the counter?

One drawback is temperature. In warm environments, Jell-O quickly returns to its liquid state. What’s more, stores that sell beer and wine can’t sell spirits. So imagine the opportunity if someone could figure out how to produce uniform gelatin shots that taste great, maintain consistency in almost any weather condition, and can be sold at all stores.

Enter Hot Rabbit — or, more accurately, Bombshell Brands in Farmington Hills. Managing partners and shareholders Justin Near and Patrick Ackerman say they spent more than a year working with various formulas before hitting on the idea to derive the alcohol from orange-flavored wine, not vodka.

By keeping the alcohol content at 10 percent by volume, and developing a product that can be stored at room temperature — above 100 degrees Hot Rabbit turns to liquid, but it quickly returns to its original state at double-digit temperatures — Near and Ackerman have been able to offer their product to retail outlets that are restricted to selling beer and wine.

“That fact alone opened up 70 percent more retail outlets to us,” says Near, president of Near Perfect Media in Farmington Hills. “We pre-package every shot and we add a bar code on each unit for ease of inventory. We launched it late last year, and we’re on pace to record seven-figure revenue by the end of the year.”

The product has a shelf life of two years, but Near doesn’t think his product will ever reach that age. “We have distributors and retailers coming to us because it’s selling very well wherever we put it,” he says. “It’s great for cruise ships, hotels, service stations, concert venues, and retailers.”

To develop the flavors — apple, raspberry lemonade, orange, peach, grape, and cran-
berry — the pair held blind taste tests and found few people could distinguish vodka from wine. The company also packs the shots in acrylic, clear cylinders that prevent the
gelatin from sticking to the container. The product has an MSRP of $1.99 per unit. Bars often sell them for between $3 and $4.

Michigan was the first distribution channel, and the product has since been permitted for sale in Florida, Texas, Massachusetts, and Nevada. Distributed by Veritas Distributors Inc. in Warren, Near says the product had to be approved by the federal government, followed by individual states.

“We’re putting together a college program, and when the students go back home, we’ll have them there, too,” Near says. “We’ll eventually add more flavors, and we’re working on a pudding shot. It’s a fun business to be a part of.” db