Clubs for women aren’t a new concept in Detroit; the Detroit Association of Women’s Clubs was organized in 1921 with eight clubs. It still exists, but right around the corner is a new women’s club located at 110 Ferry St. in Midtown: BasBlue.

The nonprofit club resides in a newly renovated historic mansion that was once home to the first president of the Michigan Telephone Co. and later served as Your Heritage House children’s museum. The new group caters as much to the local community as it does its members.

Miah Davis, the club’s membership and community manager, says the establishment hopes to attract women from every field of business. “It’s not our goal to be restricted to one tax bracket, income level, or career field,” she says. “We want to have female engineers, tradeswomen, accountants and lawyers, doctors, artists, designers — everyone.”

Key to the future success of BasBlue is its interaction with the community, which includes nearby Wayne State University, the College for Creative Studies, the Detroit Institute of Arts, and the Detroit Historical Museum, among others.

“BasBlue is designed to be driven by the community and the members, so we’ll have our ears to the ground to hear what our members are saying,” Davis says. “We want everyone to feel welcome. People are impressed that it’s not a corporate setting. It’s warm and inviting, and there’s cozy seating. We’re kind of designed to be a home away from home.”

As a nonprofit, the club leans heavily on donations as well as membership fees, revenue from a café, and space rentals for events.

“BasBlue is dedicated to creating pathways and opening doors for women,” Tellem says. “Its purpose is to cultivate a community of connection and mentorship, and a space where skills can be learned and shared. I firmly believe we’re stronger, wiser, and better together. Over the past year, my belief has only grown stronger.”

The pair could hardly have selected a better place for their new club. The exterior features natural brick with green painted wood accents and a white bas relief sculpture in the façade. 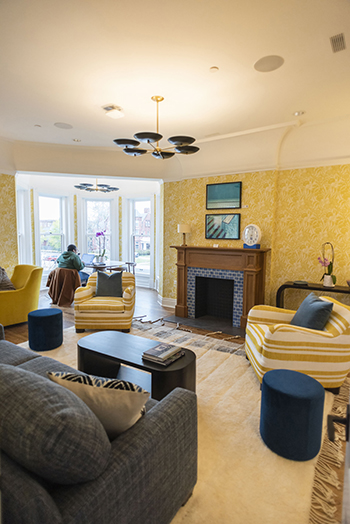 Inside, the lobby boasts hardwood floors, wood paneling, a leaded glass window, and a working fireplace. The intricately carved wood banister has been restored to its original glory.

The rooms throughout the mansion are decorated in a modern style, yet in keeping with the house’s architecture, and the contemporary chandeliers somehow don’t look out of place.

The building — the first floor of which is open to the public weekdays from 8 a.m.-4 p.m. for coffee, lunch, or brunch — features a café and a full-service kitchen fashioned from the house’s former coal room. It also has lounge areas, state-of-the-art conference rooms with plenty of electrical outlets for cellphones and laptop computers, event space, and a health and wellness space complete with shower facilities and a yoga area, all operated and programmed by female business owners.

The first-floor library is stocked in partnership with the Detroit Public Library, and features tomes about Detroit and notable women. The second floor is for members only. The third floor, once the home’s attic, now serves as an event space.

Every room showcases artwork acquired through partnerships with several local art galleries. Most of the pieces are by local women artists and are for sale. “Every space in every room was designed intentionally to foster and cultivate connections and conversations,” Hildebrand explains. “That includes how we place the chairs and how many chairs we place.”

Hildebrand says even in this age of inclusion, it’s important for women to have a place to meet with other women.

“Networks take time to develop,” she says. “For many, many, decades, men have traditionally had places like golf courses and cigar clubs and other places. History shows that women haven’t had the same opportunities.”

Hildebrand says women who are new in their careers need to be able to meet with women who are more experienced in business, so wisdom can be passed along.

“There are more CEOs named John than there are female CEOs of Fortune 500 companies,” she says. “You cannot be what you do not see. If you have no spaces to see where you may or may not want to be, how are you going to strive for that opportunity?”

BasBlue is off to a nice start. It had close to 130 members when the doors opened in October 2021 and had 212 by the end of the month.

Memberships are designed to meet women where they are in their careers, and the club includes pricing levels specifically for students and young professionals. Fees are $600 per year for those under 35, and $1,200 for 35 and older. Corporate membership programs that include multiple memberships and the ability to host events are being developed.

Built in 1887, the home of BasBlue originally was the residence of William Jackson. In addition to being an early Michigan telephone pioneer, Jackson was president of the Municipal Lighting Commission under Mayor Hazen S. Pingree from 1893 to 1894. After two other owners, the Jackson House was sold to the Merrill-Palmer Motherhood and Home Training School (now the Merrill-Palmer Skillman Institute at Wayne State University) in 1925 and was used as a staff residence. In 1969, it became the home of Your Heritage House, a children’s museum founded by Josephine Love.

Anyone wondering where the name BasBlue came from can consult a French dictionary. Bas blue is a variation of the French bas bleu, which literally means blue stocking but has evolved over time to describe an intellectual woman.