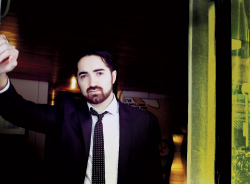 As a freshman wandering the campus of the University of Michigan in the late 1990s, Sam Valenti IV experienced the awkwardness of unfamiliarity — just like everyone else. But his loneliness didn’t last long. Within his first week, he had a chance encounter with recording artist Matthew Dear, who soon became the foundation of Valenti’s future record label.

Now a thriving producer, Valenti hasn’t lost his passion for entertainment. From producing and distributing music to licensing songs for use in TV shows, Valenti travels all across the globe to keep his record business humming.

“Everyone genuinely understands that music from Detroit is an export business, but I don’t think people know how fertile it is,” says Valenti, founder and CEO of Ann Arbor-based Ghostly International. “I wake up every morning and tell myself that my customer is down the street, but [he’s] also in Japan, China, and England.”

Aside from producing songs that are constantly replayed, Ghostly International — with three employees in Ann Arbor and a handful of others in New York and L.A. — has developed a healthy licensing business, with songs by Midwest Product and Choir of Young Believers appearing on such TV shows as CSI and Melrose Place. Ghostly’s artists and their work have also been featured in other notable projects, such as the Drew Barrymore film Whip It, the ESPN video game NFL 2K5, and in commercials for Victoria’s Secret, Puma, and the Chevy Volt.

After his run-in with Dear, Valenti knew he’d found traction. While their first song, “Hands Up for Detroit,” didn’t attract much attention at first, a subsequent sampling by Dutch artist Fedde Le Grand became a worldwide phenomenon. “We sold 500 copies when it first came out,” Valenti says. “It’s funny how a twist of fate like that can create a whole other revenue stream for your business.”

Creating another dimension for Ghostly, Valenti has also tapped into the world of visual arts. For example, Royal Oak artist Michael Segal provided inspiration for the company’s logo when Valenti discovered Segal’s cartoon BoyCatBird on a postcard. The ghost logo was born from the moniker Valenti used in high school — DJ Space Ghost. “It has an energy that’s elusive,” Valenti says, “but [it’s] playful and friendly at the same time.”

Distribution accounts for plenty of the label’s revenue, while digital downloads through iTunes and ghostly.com contribute to a sizable share of Web traffic.

Another benefactor in the rise of sales is Ghostly Discovery, a free application on the iPhone and iPod Touch that, much like Pandora, allows users to create music playlists based on their moods and tastes. With a target demographic of users in their 20s and 30s, Ghostly has clearly found a receptive audience. “We were there when iTunes and iPhone apps came out,” Valenti says, “and we want to be ready for the next mode of distribution.”