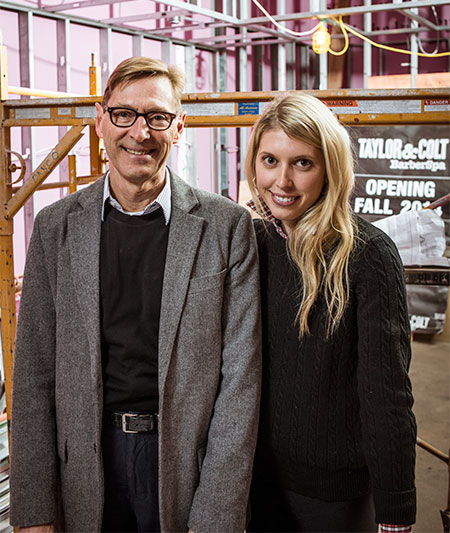 Anew entry in the professional grooming sector in Michigan all started with a purple bag. Taylor & Colt, an emerging franchise based in Toronto, is a men’s barber spa that’s opening in downtown Ann Arbor in the first level of the Michigan Theatre, as well as in the Village of Rochester Hills near Oakland University.

“There are three stores in Toronto, and we’re looking for very dense locations in urban or suburban cores,” says John M. White, who, with his brother, Thomas C. White, holds the Taylor & Colt franchise rights in Michigan and has first right of refusal to operate in Massachusetts, Texas, Georgia, Illinois, and Miami.

“The stores are upscale in terms of how they look, and each will be around 1,000 square feet in size. In addition to eight barber chairs (in Ann Arbor), there are spa services offered in private areas for laser hair removal, massage therapy, pedicures, manicures, and hair-coloring. There’s also a (complimentary) coffee and juice bar, newspapers, magazines, and flat-screen TVs,” White says.

Down the road, the brothers are looking to expand into Birmingham, East Lansing, and Grand Rapids. John’s daughter, Birdie White, is the compliance and liaison officer for The Roaring Fork Co. Ltd. in Windsor, which holds the Taylor & Colt franchise agreement rights. Following their Michigan openings, the family is looking to expand to the Boston area, “which we see as Ann Arbor times 10, given there are so many people and so many universities,” White says.

In addition to a store manager, each Taylor & Colt will have up to eight stylists. A basic haircut with shampoo is $35, and there’s hot towel service for a shave. Other offerings include teeth-whitening, beard and moustache trims, waxing, and scalp treatments. There are also professional grooming products available for purchase.

The Whites have been operating various family-owned businesses since 1952, including manufacturing paints and varnishes. Additionally, one of the White’s companies, run by Thomas, produced millions of the purple bags for Crown Royal. In addition to a fulfillment center in Amherstburg, located south of Windsor, there were large-scale, cut-and-sew textile operations in Haiti and Vietnam.

After selling the business, the pair looked to enter the restaurant industry, but they decided to pass on that opportunity, given logistics challenges.

“We came from manufacturing, and the bane was to manage inventory,” White says. “With food, there’s inventory, and it’s a perishable inventory.”

They then decided to shift to the franchise arena and chose Taylor
& Colt.

“Our demographic for Taylor & Colt is men aged 20 to 40 who are looking for an upscale grooming experience in a dense area,” White says. “Ann Arbor is perfect for us because you’re right in the urban core, Google is there, you have a university town with a lot of research going on, and it’s walkable. We love that.” db