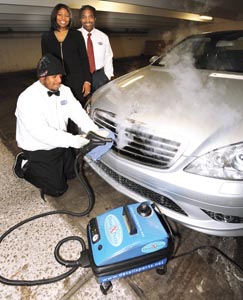 When Joe Davis, a partner in MGM Grand Detroit, was told that a car-detailing service in Detroit needed only a pint of water to wash his Mercedes Benz S550, he was skeptical.

“One pint of water? Are you sure about that?” Davis recalls asking Emmanuel and Angela Williams, who spent eight years refining their business before deciding to offer franchise opportunities. Since last year, the Williamses have inked five franchise deals and are on pace to sell 100 more this year.

“I don’t know what it is with the steam cleaning, but my car is almost impervious to dirt,” says Davis, president and owner of J.D. Consultants, a gaming advisory firm in Detroit. “The best part is they can do my car at work or at home, so it’s convenient. My wife gets her Jaguar XK8 done, too.”

Emmanuel, founder and CEO of DetailXperts, says that after the EPA adopted stricter regu-lations on wastewater, he began experimenting with a steam system to clean cars and trucks.

“It took a while, but we have a patent pending for our exterior cleaning method. Plus, we wanted to use all biodegradable solutions, so there’s

no chemicals,” he says. “We use special towels, so there’s no water runoff.”

Currently, the company has 40 corporate accounts, including fleet operators of cabs and buses, as well as ambulances, lease operators, fire trucks, and motorcycles. There are more than 400 individual clients, as well.

The company, which is registered to do business in 38 states, is attracting keen interest from drought-stricken regions. “We can take water for granted in Michigan, but down south and out west, it’s a different program,” Angela says. Prices range from $20 for a standard wash to $90 for a complete makeover, including interior and exterior cleaning of the car, carpet, rims, upholstery, tires, and ventilation system, along with degreasing and deodorizing.

Franchise agreements range from $49,000 to $128,000, depending on the location and other factors. Forty percent of the franchise fee must be working capital.