Taking inspiration from previous seasons, leading fashion designer and Motor City-native John Varvatos is composing this spring season’s lines with innovative, limited-edition, and uniquely-designed fabrics that give texture without weight — and he is bringing this collection to his new flagship location in downtown Detroit.

Due to open in mid-March in the Wright Kay Building at 1500 Woodward (one block south of Grand Circus Park), this will be Varvatos’ first store located in the Midwest, and the first high-end designer fashion retailer to open in the downtown district in decades. Varvatos says his plan to locate in the city was more than a business decision.

“There’s a lot of passion in it,” Varvatos says. “I feel like (opening) the store is just the tip of the iceberg for what’s happening with the city right now, (and) with what the opportunities are.”

The store will offer full lifestyle brands featuring everything from tailored suits to sportswear and leather jackets to accessories. In addition, Varvatos says he is focused on dialing into the heritage and legacy of the city through his specialized merchandise, including leather jackets, shoes, and T-shirts featuring iconic Detroit musicians such as Iggy Pop and Alice Cooper. The apparel will be introduced on a continual basis.

“He is one of the pioneers of reinventing Detroit’s retail scene, and I believe it’s one of those situations where all it takes is that one person who believes and is willing to take a risk to get others to follow,” says Karen Buscemi, president of Detroit Garment Group Guild, an organization that provides education and opportunities for Detroit’s fashion community. “I think that we’re going to see a really nice long line of other retail stores coming down Woodward, and I really think that he’s going to be a big part of why that happens.”

Other outlets that have been looking for space downtown include Tiffany & Co., Restoration Hardware, Trader Joe’s, along with several restaurants and the M-1 Rail line (opening in 2016). Mike and Marian Ilitch also will break ground this year on a new hockey arena for the Detroit Red Wings and a multi-faceted collection of urban villages called District Detroit. The arena, to be located in an area at the northwest corner of I-75 and Woodward, is set to open in summer 2017.

In addition to opening his store, Varvatos is exploring the manufacturing of his fashion products in Detroit. And because music is a part of the city and his roots here, Varvatos — who has a record label with Universal Music and Republic Records — would like to open a recording studio in the city.

Although he doesn’t carry other brands, Varvatos says he would love to talk with Detroit artisans about giving them an opportunity to have a venue to showcase their designs — whether jewelry, denim, or something else that fits into the mission of the store.

“You’ve got an amazing labor force here who want to work and want to be creative. It inspires me to do more there as well,” Varvatos says. 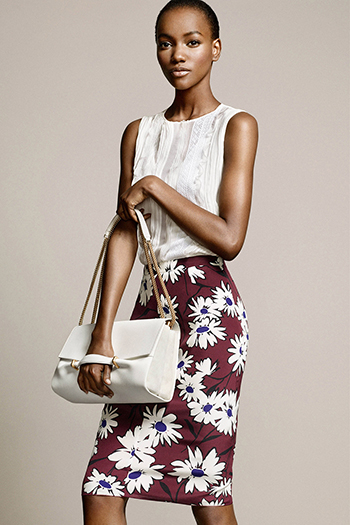 Fringed and frayed clothing, bright flowers, and bold patterns; leather skirts, pants, and shirts; and gingham check print will be part of the styles for women this spring.

“The biggest thing this season is the ’70s look,” says Cheryl Daskas, co-owner of Tender, a luxury designer clothing store in Birmingham. “It can be very funky, or it can be toned down and ladylike, so that you can wear it to the office.”

For a more structured look, designer Nina Ricci has contributed jackets with military pockets that can be worn for business. “It is very feminine, but still has a strong look to it,” Daskas says of Ricci’s clothing.

Other designers featured at Tender will include up and coming Baja East, the more business-oriented Jason Wu, the “quite popular” Peter Pilotto, and Prada’s Miu Miu, which is “a more relaxed line. It’s not so serious as Prada; it’s more fun,” Daskas says. db