With a blank canvas as a backdrop to support hunger relief in metro Detroit, Emily Ford, Allison de Windt Hull, and Maggie Durant set out to create an experiential event that would transcend traditional charity fundraisers. Their challenge, as with any new endeavor, was starting from scratch.

Ford, who met Lauren Bush Lauren, a niece of former President George W. Bush, via a college internship in New York City, was interested in hosting a local FEED Supper with Hull and Durant. Their vision was that invited guests would enjoy a culinary experience and make a donation to provide meals to families in need.

Bush Lauren, a fashion model and designer, founded the nonprofit organization in 2007 after witnessing hunger firsthand as an honorary spokesperson for the World Food Programme. Each FEED fundraising event includes giving away custom-designed tote bags — inspired by the burlap bags of food rations Bush Lauren saw distributed by the World Food Programme — that are produced to benefit a local food-based nonprofit organization.

Ford, Hull, and Durant are also part of a subcommittee of the Fair Lane Fellows, a group that works to engage young professionals in the historic renovation of the Fair Lane Estate in Dearborn. In 1915, Henry and Clara Ford built the 31,000-square-foot manor along the Rouge River as a respite from the fame that came as part of owning Ford Motor Co. and the popularity of the Model T.

Undergoing a multimillion-dollar restoration, the estate has been mostly closed to public events as a team of architects, designers, and artisans undertakes major structural and system repairs. Interior work includes the restoration of stained-glass windows, the removal of paint to expose the original wood walls and trim, and the recreation of furnishings, textiles, and objects.

As Ford, Hull, and Durant worked to create a local FEED Supper, they selected Fair Lane as a symbolic venue for hosting a strolling dinner where they could highlight the conservation projects of Henry and Clara Ford. In addition to cars, Henry, and his son, Edsel, developed the Fordson tractor in 1917, while Clara encouraged the formation of roadside markets so that families, and especially women, could benefit from farming.

Once the setting was selected, the trio designed FEED Detroit tote bags to distribute to invited guests as part of the ticket price — each bag represents 1,000 meals for Forgotten Harvest in Oak Park.

Ford, whose husband, Henry Ford III, is the great-great grandson of Henry and Clara, says one goal of the event, which was held on Oct. 7, was to utilize as much of Fair Lane as possible. “Since the estate is currently undergoing an ambitious, large-scale restoration and recreation project, we felt that the opportunity for our guests to see and experience as much of (it) as possible was critical in showcasing these efforts,” she says.

As might be expected, hosting a strolling supper in an active construction zone had its share of challenges.

“In a way, it sort of felt like we were building an airplane while we were flying it,” Hull says. “From final concept to execution, we worked on a very quick timeline of roughly three and a half months (with Detroit Cultivated, an event planning and design firm). Fair Lane isn’t traditionally used as an event space and, in fact, it’s not currently open to the public, so we had to bring in everything from furniture and glasswear to generators and lighting systems.”

The party for more than 100 guests was distinctive from the outset, with the valet located at a nearby parking lot on the campus of the University of Michigan–Dearborn. From there, guests were driven to the estate via Ford Model T and Model A cars that are owned by the estate’s network of Ford enthusiasts and collectors.

Arriving at the front door, guests were guided to the north terrace of the estate. The stone-tiled patio overlooks a meadow and a pond designed by famed landscape architect Jens Jensen (part of 1,300 total acres). The reception included food and beverage pairings from Chef Doug Hewitt (Chartreuse, Detroit), Chef Brad Greenhill (Takoi, Detroit), and the Detroit Food Academy (a nonprofit food entrepreneurial program).

Following welcoming remarks from Ford III, corporate strategy manager at Ford Motor Co., and his father, Edsel B. Ford II, a Ford board member, guests were invited to follow a hand-drawn map that guided them through the music, gathering, dining, and former pool rooms; a stroll through the rose and blue gardens; and wound up at a large tent furnished with tables and chairs.

“The intention was to create four different experiential touchpoints in four different locations,” Durant says. “The design was inspired by architectural drawings and blueprints of the estate. It was also one way we included an educational aspect to the event, and we (provided) anecdotal historical information about the lives of Henry and Clara. We wanted people to leave having had a great time, but also feeling like they learned something.” 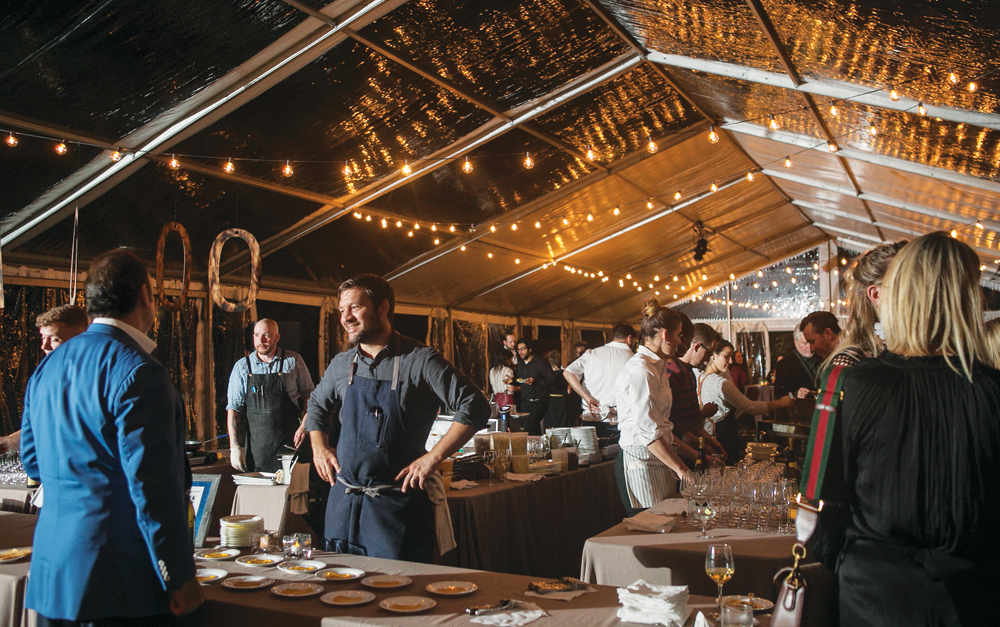 To gather the culinary teams, Ford turned to Jack Aronson who, with his wife, Annette, founded Garden Fresh Gourmet in Ferndale. The couple and their partners sold the company to Campbell Soup Co. in 2015 for $231 million. The Aronsons have since launched two food companies in metro Detroit: Great Fresh Foods and Clean Planet Proteins, both based in Clinton Township.

It helped that Ford already knew Jack Aronson, as they both sit on the board of Beyond Basics, a nonprofit organization that operates a certified nonprofit literacy program inside public schools in Detroit and the region.

“I met Emily for coffee one morning over the summer, and Annette and myself have a great friendship with James Rigato, and so we all worked on inviting the chefs, their culinary teams, and the Detroit Food Academy,” Aronson says. “Their participation was significant since the event was held on a Saturday night, which is often the busiest day of the week for a restaurant.” 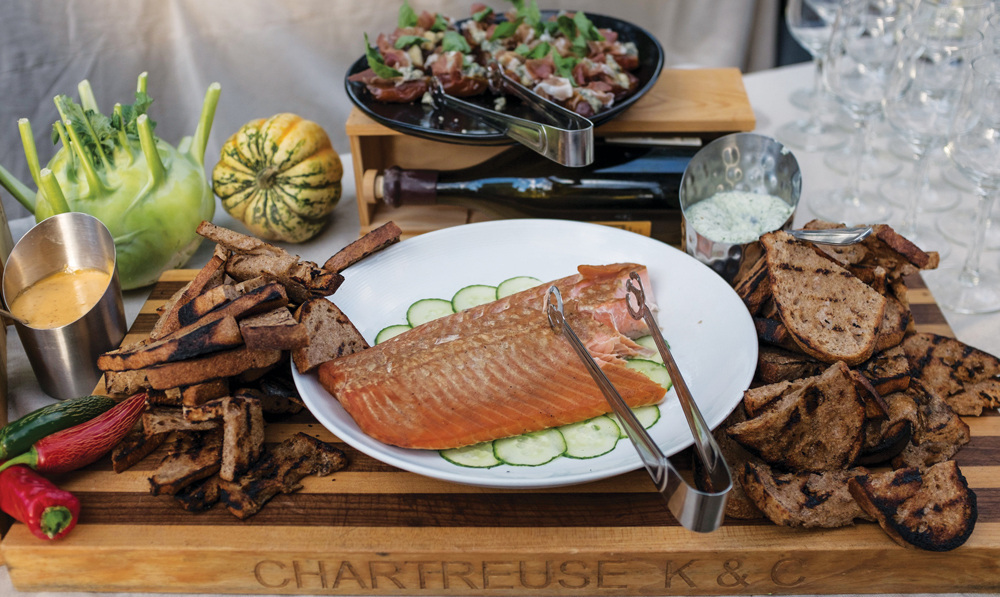 To assist with raising donations through sponsorships, Ford, Hull, and Durant worked with Patrick Rugiero, a major fundraiser for area nonprofit organizations like the National Kidney Foundation (Michigan Chapter) in Ann Arbor and Life Directions in Detroit. From there, Rugiero introduced Henry and Emily Ford to Matt Si-moncini, president and CEO of Southfield-based automotive seating supplier Lear Corp.

“Once Matt heard that the event would raise funds for Forgotten Harvest, as well as highlight the Fair Lane Estate, he was fully on board with the mission and Lear became the title sponsor with a donation of $100,000,” says Rugiero, executive director of the Roman Village Restaurant Group in Dearborn. “In addition, we worked to identify the next generation of philanthropists to support the event.”

Following dinner, the map guided guests past Lilac Alley and the Bowling Green to Fair Lane’s powerhouse, designed by Henry Ford and Thomas Edison, where an afterglow party included desserts, dancing, a collection of Fordson tractors, music from DJ Stacey “Hotwaxx” Hale, and the opportunity to assemble LED light kits.

Bush Lauren, who attended the event with her husband, David Lauren, vice chairman and chief innovation officer at Ralph Lauren Corp. in New York City, says it was her second time visiting the Motor City. She was in town last February for a tour of the city and Fair Lane Estate, and came away impressed by “the amazing history of innovation and industry.”

As for the event itself, she says: “To host a FEED Supper at the Henry and Clara Ford Estate was really amazing. I am so grateful to Henry and Emily for hosting it, and to all of the co-chairs who helped organize it, as well as the sponsors. The best part of the evening was that we raised thousands of meals that will all be given locally in Detroit via Forgotten Harvest. It’s definitely a place I hope to keep coming back to in the years to come.”

As for hosting additional fundraisers, Ford, Hull, and Durant are looking at different options. “We know that we’d like to do something together again in the future, but where and what that looks like is still to be determined,” Hull says. “Rest assured, whatever we do choose to do, we’ll work hard to continue to raise the bar with a highly considered, experiential, and choreographed event for young Detroiters.”