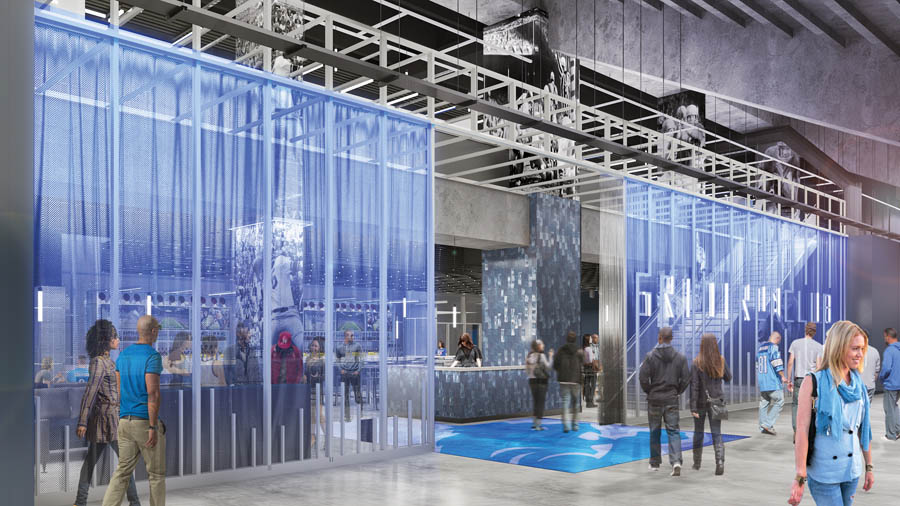 As Little Caesars Arena takes shape along Woodward Avenue, the Detroit Lions are determined to ensure that Ford Field doesn’t get left in its vast shadow.

The Detroit Red Wings played their final game at Joe Louis Arena on April 9, and, along with the Detroit Pistons, who are moving from the Palace of Auburn Hills, the two teams will take up residence at Little Caesars Arena starting in October.

The move will put all four of Detroit’s major sports teams within a few blocks of one another, making it the most concentrated sports and entertainment district in the country. Although the new $650-million venue that was the brainchild of Mike and Marian Ilitch has been getting most of the press, it’s worth noting that Ford Field, home to the Detroit Lions since 2002, is simultaneously undergoing a significant makeover.

If all goes according to plan, shortly before the world premiere of Little Caesars Arena — Kid Rock will kick off the first of six shows on Sept. 12 — Ford Field will be putting the finishing touches on a $100-million renovation. The retooling project, which includes larger video boards, updates to the sound and Wi-Fi systems, renovated suites, and numerous other features throughout the venue, was ambitious in scope due a demanding timeframe that called for completing the work between football seasons.

“Certainly, we feel the deadline is kind of a hard one, because we have to start playing preseason games in August,” says Ron Wood, president of the Detroit Lions. “So we’re well aware of the timeline. When we decided to pursue doing (the remodeling) in one offseason, we made sure that we thought it was realistic. It’s not going to be easy, there’s no doubt about that, but we’ve got a good plan in place to get everything done.”

Wood says he expects the project to be finished the first week of August, given the first preseason game at Ford Field is scheduled for the middle of the month. “I’ve got confidence the timeline can be met,” he says.

Most of the demolition work was completed in March, while the renovation of older suites and seating started at the beginning of April.

The largest addition to Ford Field’s updated look will be the new video scoreboards. The franchise invested in two Daktronics main video board displays that are each 39.5 feet high by 152 feet wide. The screens will be flanked by four additional displays, each measuring 13 feet high by 59 feet wide. The smaller screens can be used individually to show stats, scores from around the league, videos, and other content, or they can be coordinated with the main display to make one, continuous 270-foot-long video screen. To put that into perspective, each combined screen is the equivalent of 556 60-inch TVs.

The new video displays, located above each end zone, will dwarf their predecessors. “Having the video boards updated — (they’re) going to be, roughly, three times the size of what we have today, with all high-definition technology — is a huge upgrade. The (old) video boards are the original ones from 15 years ago; they’re smaller, with standard video presentation,” Wood says. “It’s going to be eye-opening when people walk into the building, both in terms of size and the quality of the video.”

In addition to being able to show more action, the improved screens will give the Lions greater opportunities to serve their fans.

“Because of (the screens) being so much bigger, we’re going to be able to do things that, today, we have to do during timeouts, like show out-of-town scores or fantasy football updates — things that are important to the fans who are at the game (and) want to know what’s going on not just in our game, but at other games.”

This renewed focus on fan experiences is a smart move, says Sean Daly, a recognized expert on sports and event venues, and associate professor at Denver’s Johnson & Wales University, one of the few programs in the country that offers a sports, entertainment, and event management degree program. “More and more these days, companies like the Detroit Lions, the Red Wings, and the Pistons are battling, literally, with, ‘Do I go home to watch the game or do I go to the game?’ ” he says.

“In the sports world we’ve kind of created this culture of fandom, where it’s part of the experience (to rub) elbows with all those other crazy fans,” Daly continues. “You have nothing in common outside of the stadium, but inside, you’re brothers and sisters. That’s been a big part of the sports and entertainment product. Now, with 60-inch, HD TVs with surround sound, people are more and more staying home, so stadiums and venues are trying to find ways to design experiences they can control, and that can maximize putting butts in seats.”

Daly says a term he often uses when teaching is “secondary experience.”

“You go to a football game or a basketball game for the primary experience, which is watching the game. But it’s all about the secondary experiences, like food and beverage, (and) how easy it is getting in and out. Wi-Fi is a big part of that. People are watching the game, and they’re managing their fantasy football team, and they’re connecting on social media about what’s going on in the game. Typically, they would do that at home. They have their own Wi-Fi, they have their laptop on their lap while they’re watching (Direct TV’s) Red Zone. It’s kind of like this ADD consumption of sport. And what (organizations) are doing now is trying to replicate that at stadiums.”

The battle for attention goes hand-in-hand with Ford Field’s much-needed Wi-Fi upgrade. If there’s been one consistent criticism of the venue over the past few years, it’s that fans are unable to use their smart devices during games. Wood says the complaints didn’t fall on deaf ears, and after the renovation, Ford Field will feature some of the best Wi-Fi in the NFL.

“The Wi-Fi that we’ve had here, that generated a fair amount of complaints, was put in when the stadium was built, back when people used Wi-Fi to maybe look up a score or (send a) text,” Wood says. “Now people are streaming videos and filming things, and tweeting them out. So the amount of data that’s transmitted today is light-years above what was transmitted when we opened the stadium.”

The Lions started laying out plans for the Wi-Fi upgrade last season, including an in-game test that Wood says most fans were oblivious to.

“We were able to test it during the last (Green Bay) Packers game,” Wood says. “The only way you can really test how this is working is when you have a full stadium and people are actually trying to access Wi-Fi and use their phones or their tablets. There was a period of time during that game where we were transmitting more data than had ever been transmitted at an NFL game. We’re very comfortable that we’re going to have something that’s at the top of the heap in the NFL.”

The Wi-Fi upgrade — vastly improved bandwidth and speed was installed by Rocket Fiber in Detroit, while Verizon provided the new system — includes access to the entire stadium, the exterior of the stadium, and the parking garage.

Although the new video boards and Wi-Fi are the main features that will appeal to pretty much every fan who enters Ford Field, the most labor-intensive aspect of the renovation is the complete overhaul of the suites and club level areas. That task went to Rossetti, an architectural firm in Detroit that was one of the original designers of Ford Field.

“When we looked at the project, we looked at it in a few different ways,” says James Renne, a Rossetti principal. “Not only did (the suites) have to be refreshed because they were getting older, but we needed to change the type of product that we were designing.”

Renne says at one time, suite-holders tended to be older fans and corporations that desired a certain level of isolation to host clients, families, and friends. However, those trends are changing, and Rossetti’s suite designs for Ford Field will reflect that.

“Fans want flexibility,” Renne says. “They’re interested in the ability to open things up and see other people. They want authenticity. What we mean by that is looking at — and this is one of the drivers for design — the Detroit identity. Looking at local artists. Looking at metal workers. Asking, ‘How do we incorporate that? How do we incorporate that into the suite
design?’ We want it to be connected to the culture of Detroit.”

To get started, Rossetti worked closely with the Lions to design a model suite to show off to current and prospective suite-holders. “The feedback we’ve gotten from everybody that’s seen (the model suite) has been very, very positive,” Wood says. “We did a private unveiling for some of our suite and club seat-holders in February. We showed a video of the renovation and I think everybody was very, very impressed.”

Wood adds, “Ford Field remains a great venue. The bones of the stadium are phenomenal. The way it was built into the (former Hudson’s) warehouse kind of keeps it a classic, timeless design. All we’re doing is trying to keep it current with the latest technology and expectations that fans have. I don’t think we’re ever going to have to do a major renovation to the footprint of the facility; this is more keeping it current for fans to enjoy while they’re at the game.”

In addition to an overhaul of the suites and club areas, Ford Field will see a redesign of The Corner Lounge, which will now be called Corner Bar.

As the Lions hustle to get the massive renovation done before Little Caesars Arena opens, Wood says he’s excited about the future. “As a lifetime Detroit sports fan, I think it’s phenomenal that all four teams are going to be downtown for the first time ever, and, as far as I know, this is the first time anywhere in the country that a city will have all four professional teams in a downtown within a couple blocks of one another.”

While Ford Field undergoes a pricey renovation, and the Pistons and Red Wings are getting a new arena, what’s going on with the Detroit Tigers and Comerica Park?

Over the winter, the baseball stadium completed a parking deck at the north end of the venue, while a new video board, one of the largest in baseball, was installed in 2012 and the Wi-Fi system was upgraded in 2015. The team also is unveiling an array of new food and drink offerings this season.

With all the competition for sports and entertainment — downtown Detroit has the second largest collection of theater seats in the country — the renovation at Ford Field is the first step toward keeping the venue relevant in a landscape that offers fans so many options (maybe even one more option if pro sports owners Dan Gilbert and Tom Gores are able to convince Wayne County to let them build a soccer stadium at Gratiot Avenue and Beaubien Street, where a planned jail was left uncompleted due to cost overruns).

While there’s little doubt that Lions fans will flock to Ford Field at the end of the summer to enjoy the upgrades, one other thing that would make the team a bigger draw is taking home the Lombardi Trophy from Super Bowl LII, to be held on Feb. 4, 2018, at U.S. Bank Stadium in Minneapolis. If that happens, Ford Field will most likely open its doors, turn on the giant screens, and allow fans to cheer the team to victory.