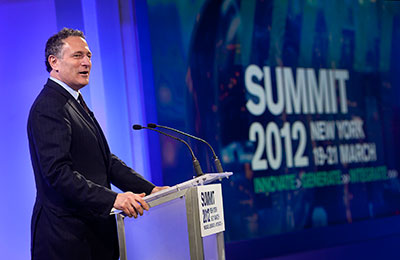 Daniel L. Doctoroff describes himself these days as a “dyed-in-the-wool New Yorker,” but he quickly offers a caveat: His favorite people in that city are those friends who, like him, have roots in Michigan.

“I really think there’s something to that groundedness that I like to think I see in myself, and others see in me,” he says. “It was a pretty wholesome upbringing, where people generally cared about each other. And I think, on some level, those values became a part of me and played a role in what I ended up doing.”

Doctoroff is the former CEO of Bloomberg LP, as well as the former deputy mayor of
Economic Development and Rebuilding in New York City, a position he held for six years in the administration of former Mayor Michael Bloomberg. He’s also a proud graduate of Birmingham’s Seaholm High School (class of ’76), with a keen interest in the fortunes of the Maples football team.

“Are they any good?” he asks. “They were never any good when I was there. In my day we never produced those big linemen. The Mighty Maples were definitely only good at golf, tennis, and maybe swimming.”

The 57-year-old Doctoroff wryly reveals he wasn’t much of a football player. “I played up until ninth grade,” he says, “and then literally, within a five-week span, I broke both my thumbs, my collarbone, and my arm, and that put an end to my football career.”

His mother was a psychologist, his father a lawyer and a state court of appeals judge. Doctoroff was the oldest of four boys, growing up just down the road from Seaholm. “I lived on Lake Park Drive,” he says, “right down the street from Quarton Lake, near Woodward between 15 and 16 Mile. I had a lot of great friends, so I look back on that entire period with incredible fondness.”

One particular memory stands out.

“I’d say the highlight of my life before graduating from high school was the fifth game of the World Series in 1968,” he says. “I’m one of those guys who can still remember every single player who even had an at-bat for the Tigers that season. So, yeah, it was a big part of growing up.”

Doctoroff went on to Harvard University, and after graduating with a Bachelor of Arts in government, he landed a position with the late Robert Teeter, a political pollster. “It was a great job,” Doctoroff says. “We were pollsters to candidates all over the place. I was 22 years old, flying all over the country, giving candidates advice, and they were actually listening to me.”

That’s something Doctoroff says he interpreted as a major red flag. “Unfortunately,” he says, “the fact they listened to me so undermined my confidence in the political system that I decided I was going to go to law school.”

While attending the University of Chicago, a law school associate got him an interview at Lehman Brothers in New York. “And it just so happened that the two senior partners I interviewed with had gone to Harvard,” Doctoroff says. “It also just so happened that the two of them hated each other, and that was very clear. They were bickering with each other and I was just occasionally answering a question, so they had no real opportunity to understand exactly how ignorant I was. And because I’d gone to Harvard, they gave me the benefit of the doubt — so I got the job. Fortunately, it clicked and I did really well.”

At his next career stop, as a partner at the private equity firm Oak Hill Capital, he handled the investments of Texas billionaire Robert M. Bass. During that period, he took an active role to secure the 2012 Olympic Summer Games for New York City. Millions of dollars needed to be raised for what would become a futile effort — the ultimate value was that it’s how Doctoroff and Bloomberg first connected.

“Mike (Bloomberg) obviously is one of the great philanthropists in New York,” Doctoroff says, “and so I went to him to raise money, and we kinda got to know each other.”

Once he was elected mayor, Bloomberg persuaded Doctoroff to join him at City Hall, where he matched his boss’ $1 a year salary and became involved in an array of municipal issues. He also earned a reputation as a bit of a hothead. A profile in The New York Times described Doctoroff pacing the flagstones in front of City Hall one morning, yelling into his cell phone. That outburst, Doctoroff confirmed in the story, ended a personal streak of 34 days of not losing his temper.

He laughs it off now, saying, “I have definitely mellowed. I realized I didn’t want to be a jerk anymore. That 34-day record is ancient history. No need to keep track anymore.”

More importantly, Doctoroff was able to parlay his passion and plan for the Olympics into a blueprint for what became New York’s post-9/11 economic development strategy. “Building a city is really about block by block, neighborhood by neighborhood,” he says, “and you gotta make sure that’s really where most of the work gets done.”

That’s part of the reason why Doctoroff is enthusiastic about the steps now being taken toward returning Detroit to its former glory.

“I’m really encouraged by Mayor (Mike) Duggan and that real focus on the streets and neighborhoods,” he says, “things like fixing the street lamps and picking up the trash. But Detroit can’t do it alone. They’re going to have to rely on Michigan, and from what I can tell, (Gov. Rick Snyder) has actually been a really good partner to Detroit, certainly through the bankruptcy and the Grand Bargain. There’s pretty good cooperation between the governor, mayor, the state, and the city. And that’s really critical.

“And you gotta build off your strengths,” Doctoroff says. “Like Dan Gilbert, he’s building off his strengths, right? He keeps building off a group of office buildings and a core downtown that he’s very thoughtfully rehabilitating, and you’re beginning to see the results. It’s encouraging; there’s lots of positive signs. But you gotta realize it ain’t gonna happen fast.”

After his stint in the Bloomberg administration, Doctoroff joined Bloomberg LP as president in 2008, eventually becoming CEO and overseeing record profits and expansion through the end of 2014, when he left with no specific plans beyond continuing his philanthropic pursuits. Doctoroff serves on several corporate boards and is a founder of Culture Shed, an innovative center for creative industries on Manhattan’s West Side, as well as Target ALS, a research consortium dedicated to developing therapies for ALS, which claimed the lives of his father and uncle.

Last June, Doctoroff jumped back into the fray when he and Google announced the formation of Sidewalk Labs, an urban innovation company devoted to improving city life for residents and businesses.

“What I really wanted to do was something that combined all the phases of my career, kind of a culmination of it,” says Doctoroff, now CEO of Sidewalk Labs. “One is on the investing side, building companies. The second is building or rebuilding cities, and the third is I ran a technology-driven data information company. I think we’re at an historic moment in terms of the way we’re going to use information in lots of different forms to rethink cities. And that’s what I want to do in this next phase of my career.” db