While the Detroit region is a baseball hotbed with fans clamoring through the gates of Comerica Park when the Detroit Tigers are in the playoff hunt, no one locally had come up with the right formula to tap that same spirit to support a minor-league team — until now.

For nearly a decade, Andy Appleby has worked to build a minor-league baseball park in metro Detroit. Given there are close to 250 minor-league baseball teams operating in North America, Appleby knew the sport was a viable entertainment option, especially with a ballpark situated within walking distance of an urban district. While raising $15 million from investors, Appleby honed in on a former landfill west of downtown Utica, near M-59 and Van Dyke Avenue, to design a stadium with a maximum capacity of 4,300 fans.

“The traffic numbers, the fact that the city of Utica was so supportive — as was Macomb County and the state of Michigan — and the density of single-family homes in the area really drove the site location,” says Appleby, founder and CEO of General Sports and Entertainment in downtown Rochester.
“You’re right near the border of Macomb and Oakland counties, there are 150,000 cars that pass along M-59 each day, and there are 1 million people living in a 12-minute (driving) radius, and 2 million people in a 30-minute (driving) radius. Plus, it’s an easy walk from downtown Utica.” 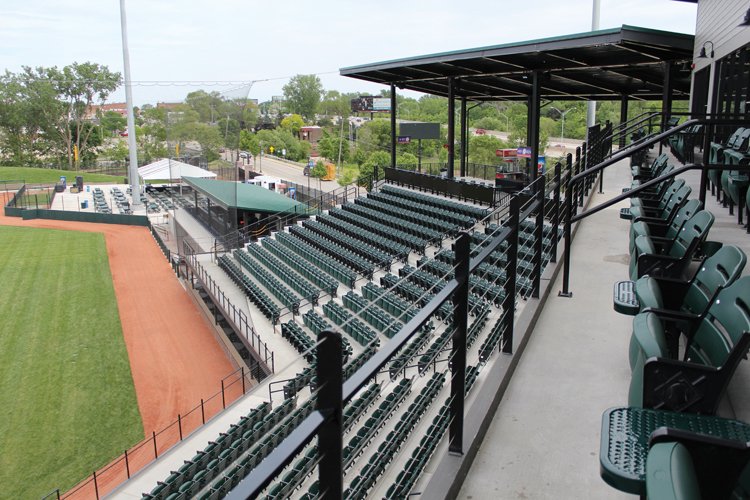 Unicorn’s Lair The new Jimmy John’s Field, home to the Utica Unicorns of the United Shore Professional Baseball League, is located just west of downtown Utica. Amenities in the 2,000-seat stadium, where three teams currently play, above, include five upper level suites; cabana suites above the two dugouts that offer luxury patio furniture including tables with inset gas-flame burners and serving counters; cushy chairs that provide views of the ballpark; and the AAA Clubhouse, which offers a private dining experience before and during games.

During a recent tour of Jimmy John’s Field, which is similar in mass to a spring training stadium in Florida or Arizona, Appleby, who is also commissioner of the United Shore Professional Baseball League, pointed out an array of amenities that improve upon traditional stadium layouts, including a series of ground-level suites, lounges, and party areas that hover above and next to each dugout.

“The distance from the pitcher’s mound to home plate is 60 feet, and the distance from home plate to the ground-level suites (behind home plate) is 30 feet,” Appleby says. “You’re right there with the action. We offer 24 different suites, and when I say different, I mean there are layouts that haven’t been in this market — or, really, most any market.”

Priced from $35,000 to $55,000 per year, the suites offer a mix of styles and furnishings. The suites behind home plate, for example, include luxury furniture, chairs, sofas, a refrigerator, a bar, countertop space, a flat-screen TV, artwork by Michigan artists, and two rows of seating bordering the field. 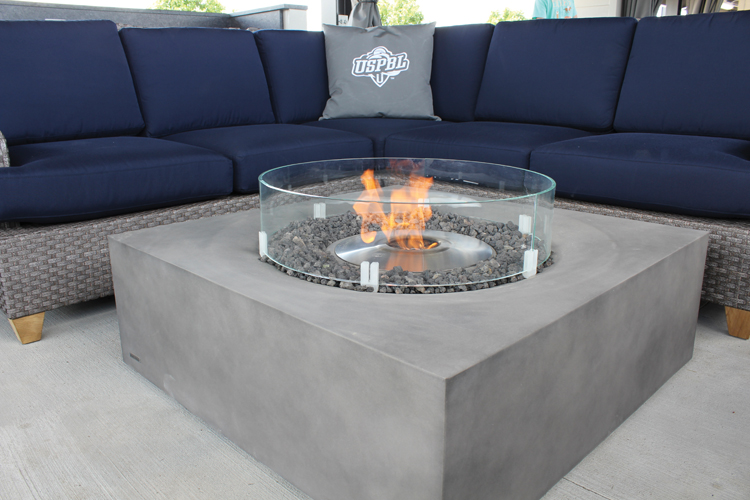 On either side of the home plate suites, stretching along the first base and third base lines, are a series of luxury boxes featuring half-circle tables and four chairs, along with personal wine lockers. Moving along the outfield lines, and perched above each dugout, are cabana suites that feature L-shaped patio furniture by Scott Shuptrine, tables with inset gas-flame burners, a canopy, and serving counters.

Other amenities include a playground, a picnic area, a grass berm behind the fence in right field, the Chevrolet Pavilion beyond the left-field line, a host of food and beverage offerings, and the AAA Clubhouse. There are also 2,000 padded seats, upper-level suites, and, beyond right field, a small Wiffle ball field featuring AstroTurf (the main field is natural grass). 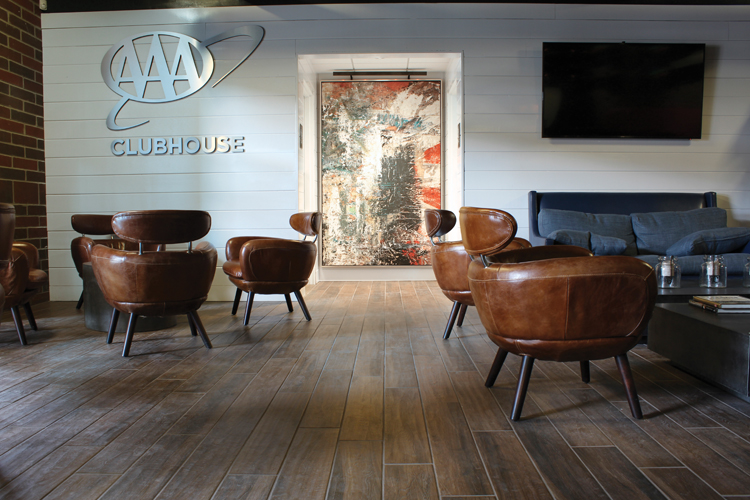 The AAA Clubhouse near the front entrance of the stadium accommodates up to 150 suite holders and club members before and during games. Once the last pitch is thrown, the space is opened to the public. “The two glass garage doors open up, we’ll add furniture in the concourse, and we’ll have live music,” Appleby says.

The league, which consists of three local teams — plans call for 20 teams spread across the Midwest over the next seven years — include the Utica Unicorns, Eastside Diamond Hoppers, and Birmingham Bloomfield Beavers. The 75-game season goes from late May to mid-September, and tickets range from $6 to $20 per seat.

“Throughout the year, we’ll host high school baseball games, graduations, weddings, and other events, along with a Winter Classic-like hockey rink,” Andy Appleby says. “There will be fireworks every Friday during the baseball season. Our plan is to build 10 other ballparks, so we’ll be hosting a lot of dignitaries throughout the Midwest. Who wouldn’t want a stadium like this in their city?”