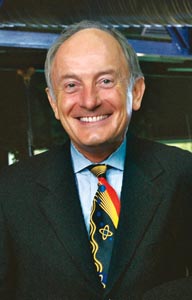 DB: We’ve run into you in places as far-flung as Russia and Pebble Beach. You still travel quite a bit.

FC: We are [moving] our operations to Scottsdale, for the winter, though we do come back regularly to Detroit. We’re in Europe at least three times a year. We like to travel and we like to race vintage cars, which we do for three or four weeks a year on the West Coast. And I’m still on the boards of three or four companies, including TRW. [It’s] useful for me, so I can stay connected with what’s happening in the auto industry.

DB: When you left Chrysler as a special adviser to then-Chairman Bob Eaton in 2000, most folks thought you’d move permanently to Scottsdale. But you didn’t, maintaining a base in Detroit, where you’ve remained very active in the community. Why?

FC: My wife and I were so moved by how we were received in the U.S., and especially [in] Detroit. From our first days, we got very involved, and when I left Chrysler I decided to do more for the city because it does no good to complain about it if you’re not willing to help change it.

DB: What made you decide to become so involved with the Detroit Science Center, which few took seriously until you led an effort to expand it somewhere close to 10 times its original size?

DB: You’re also involved in a national program with Dean Kamen, the inventor of, among things, the Segway Personal Transporter called First Robotics. What’s that?

FC: It helps kids get a sense of what science does through robots. They work six weeks to build a robot and then get to try it out. When First Robotics started, there were four or five schools (in the country), and now Michigan alone has 150 schools involved.